Volleyball gets huge win in Windsor 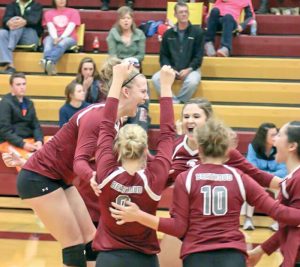 While they might all look the same when one views the box score, not all wins are created equal. For a variety of reasons, some wins just mean more.

“Tonight was a battle of wits for the Lady Spartans,” Berthoud Head Coach Daisha Agho said. “Turns out they brought them out to win a nail biter against one of the conference powerhouses this year to spoil their hopes for the conference title on their own court.”

Berthoud pushed the match to a fifth and final set when a serving error by Windsor put the Lady Spartans ahead 22-20. With Haley Hummel serving for Berthoud, a kill from sophomore outside hitter Julie Ward and another from setter Jessa Megenhardt put the Lady Spartans up 24-20. Windsor libero Lacey Garcia was unable to return Hummel’s back corner serve, knocking the ball out of play and giving Berthoud the 25-20 win.

With the score knotted at 12-all in the decisive fifth set, Berthoud middle Shaylee Pierick gave Berthoud a one-point lead with a kill that resulted in a side-out. With junior Shelby Braesch serving, Berthoud’s Sarah Howard was able to block a Windsor return on the right side. When the ball found the floor just beyond the net but out of reach of the Lady Wizards front line, Berthoud was at game-point with a 14-12 lead.

Feeling the heat and knowing a loss would deny them any chance at a TVC title, Windsor called timeout. It reinforced the message Agho wanted to impart to her team before the night’s contest.

“I told the girls before the match, and kept reminding them, that all of the pressure was on Windsor,” said Agho. “Coming in to tonight’s match I reminded them that we know we are in regionals and tonight’s win would really help our standings, but the pressure is off and to go and have fun and just play. Apparently that’s all they needed to pull off this upset. I’m very proud of them!”

Perhaps the pressure got to Windsor, as on the next set a kill attempt was received and returned in textbook fashion by Ward and following a return close to the net from Emily Trujillo, Windsor middle Kylie Hurst erred in return, hitting the ball behind her and out of play, resulting in a point and a match win for the visiting Lady Spartans.

Windsor committed 24 errors on the night, matching Berthoud, but well above their season average of 15. Ward’s 16 kills were a game high, as were Hummel’s 74 digs. Trujillo led Berthoud with four blocks and Megenhardt’s 35 assists moved the junior into second place in the TVC in that category.

Berthoud (11-8, 9-5 conf.) has completed their TVC schedule for the year and will play in a tournament in Golden on Saturday, Oct. 31, for their final regular season matches. Following that, the Lady Spartans will prepare for regionals where a return trip to the state tournament will be on the line.