Using an old trick with a new dog: New coronavirus vaccines in development at CSU

As coronavirus (SARS CoV2) continues to wreak havoc across the globe, scientists from a variety of fields at Colorado State University in Fort Collins are bringing new ideas and adapting successful old ones to develop vaccines against COVID-19, the disease caused by the virus.

“All coronaviruses are of animal origin. This (SARS CoV 2) is the seventh coronavirus that has been identified,” said Professor Raymond Goodrich, Director of the Infectious Disease Research Center at Colorado State University. 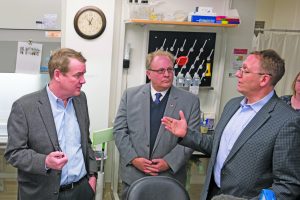 “Our goal is to fight global health threats,” he said.“We formed a consortium of people experienced in veterinary medicine, immunology, pathology and other fields. It’s a collaboration between government and private industries.”

Goodrich has developed one of the most promising potential new vaccines, SolaVAX.

He decided to take a different approach in developing a vaccine based upon work he had done in the late 1980s to 1990s, in which he developed methods to remove pathogens from blood products to protect people from contracting diseases from blood transfusions.

“The technique disrupted nucleic acid while maintaining cells and proteins in the blood products. It destroyed the bad things and left the good things intact,” he said.

It was very successful, and now he’s adapted the technique to remove the “bad things” from the virus.

“It’s using an old trick with a new dog,” he said.

The SolaVAX vaccine method involves exposing the virus to riboflavin (B2), a vitamin that has photosensitizers that, combined with specific wavelengths of UV light inside a machine, “disrupts and destroys the signal required by the virus to replicate, but creates an immune response. The RNA signal responsible for replication is damaged beyond repair. It’s like scrambling the egg yolk within,” he said.

Some vaccines only inactivate parts of the virus to create an immune response, but with SolaVAX, the whole virus is inactivated. It nevertheless appears exactly like the virus to the immune system, which, in response, creates antibodies to it.

“Antibodies that bind to a spike protein can be very powerful,” he said.“We were able to generate very high levels of antibodies needed for an effective vaccine and hope they will confer long-term immunity.”

The SolaVAX vaccine has been shown to be highly effective on hamsters. They have similar receptors to those of humans in their cells. A paper on the study was submitted to a peer-reviewed professional journal in November.

The next step would be testing it on humans in clinical trials.

But the appearance of mutations in the virus has many concerned about whether vaccines will remain effective. One of the variants may be more deadly because it appears that it can avoid antibodies, though this is not certain at this time.

“The change in the main type of virus in circulation is a result of evolutionary pressure we put on the virus,” said Goodrich.  “It is constantly mutating with new variants popping up.  Sort of like playing whack a mole, if you knock one form down, another one can pop up and become predominant.  We need to be able to hit as many or all of them at once to keep one from popping up and breaking out into larger numbers of infections.  There are many strategies to do this and our approach is pursuing one of them.”

Although it is common for viruses to mutate, as flu viruses do every year, not all mutations affect the spike protein.

“If the key changes, a vaccine may not protect you,” he said. “I’m concerned about the mutation in South Africa. It does appear to change the nature of the spike protein. That could impact the efficacy of the vaccine.”

While other vaccines use only a portion of the virus to provoke an immune response, the fact that the SolaVAX vaccine uses the whole virus makes it more able to withstand the impact of mutations.

“That’s the advantage of using a whole inactivated vaccine,” he said.“The vaccine can be protective against mutated strains. It’s everything that is normally there plus the variants.

“When we grow the virus in culture, it shows many of the variants that you see appear as it circulates in humans.  So our virus preparation starts with a mixture of different virus forms.  We then inactivate this to prevent replication of the virus but all of the different variations in how the virus displays its proteins are still there in their different forms.  When someone is vaccinated with this material, this can lead to generations of antibodies and cellular immune responses to all of these varying forms.  This in turn has the potential to confer broader protection than if we picked only one form to go after.

“We don’t know what coronavirus will be like,” he said. “Right now we’ve got 90% of the problem solved. That doesn’t mean it is permanently fixed. We need to monitor changes in the virus. We never believed SolaVAX would be an only approach. It is a way of making advantages. We’ve built 90% of the structure and can fill in cracks as the virus changes. It’s easier than developing a whole new vaccine.”