National Weather Service: Tornadoes a rare occurrence in this area 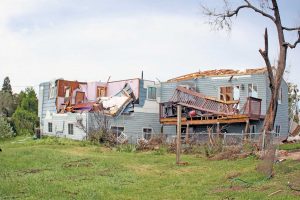 The home of Bill and Lorraine Eyl, located at 2600 Blue Mountain Ave., was destroyed by the EF3 tornado on June 4 that destroyed two other homes and damaged 17 other buildings as it tore through the southern section of Larimer County. The Eyls were lucky and survived the storm in their basement. No serious injuries or fatalities were reported as a result of the storm.
Becky Justice-Hemmann / The Surveyor

Robert Stumpf had just returned home after dinner with family the evening of June 4 when he first heard the reports of a tornado spotted near Berthoud. It was a call that is very unusual for the Berthoud Fire Protection District’s Operations Chief.

“It was crazy,” Stumpf said. “It was unbelievable. I grabbed my stuff and headed for the car immediately.”

He was on Highway 287 when the first call came in of a structure collapse. At that point he hit the lights and sirens and sped toward Blue Mountain Avenue where the tornado’s path destroyed three homes and damaged more than a dozen more structures. As he drove to the scene the intense storm continued.

“There was a point I just had to stop because the rain was so hard I had no visibility,” Stumpf said.

When he first pulled up to Blue Mountain Avenue the weather wasn’t letting up, with torrential rain and hail so big “it hurt,” he said, making it difficult for first responders to assess the situation.

What unfolded in the next 24 hours would be a very different incident than most that the Berthoud Fire and associated first responders are used to in this area.

“It only took a few moments to realize that this was a much larger incident than we are used to,” Stumpf said.

Fortunately for the first responders, the 2013 floods that affected a number of Front Range communities gave the Berthoud Fire Department and other first responders a firsthand look on how disaster response works. Local agencies received assistance from emergency crews as far away as Fort Collins and Windsor, and Longmont and Boulder County as well.

Neighboring communities sent aid, including fire departments from Loveland and Longmont. Others sent crews from Frederick/Firestone, Johnstown/Milliken and even Poudre Valley Fire Protection pitched in. Law enforcement from Larimer County and Boulder County Sheriff’s Offices both aided in the emergency response, along with the Colorado State Patrol. All of the organizations worked together and executed a successful operation which ended – luckily – with none seriously injured or worse, Stumpf said.

“It speaks volumes of the preplanning that’s gone into that type of response and the relationships that exist between these agencies,” Stumpf said.

The tornado completely destroyed three homes and damaged a dozen more as it tore through an area about four miles southwest of Berthoud, near the Larimer and Boulder County line on June 4. On June 7, the National Weather Service in Boulder confirmed the tornado was an EF3 with winds up to 140 miles per hour, making it the strongest tornado to hit Colorado since the Windsor tornado in 2008.

While the tornado was relatively distant from Berthoud proper, the storm and subsequent flooding had potential to damage roads and drainage in town. Berthoud Mayor David Gregg and Town Administrator Mike Hart toured the damage area and the town’s facilities on June 5 to assess the damage and found that everything in town was relatively unaffected, including the town’s wastewater and water plants.

In all, the first responders were on the scene at Blue Mountain Avenue from roughly 6:45 p.m. June 4, to 4 p.m. June 5. Stumpf said that at 8 a.m. Friday crews retraced the storm’s path to look for injured victims.

The fire department then assessed utility issues with utility and gas companies to ensure that gas leaks or broken power lines were addressed. 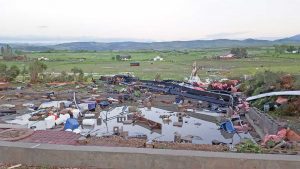 Only the foundation and debris is left at the house located at 2431 Blue Mountain Ave., after the EF3 tornado destroyed it on June 4, along with two other structures and damaging 17 others.
Courtesy of Berthoud Fire Protection District / The Surveyor

In the days that followed, affected residents assessed the damage. Some were able to gather some personal belongings while others were able to stay if the damage was minor enough.

About 80 people attended a meeting at the Berthoud Community Center Tuesday night to listen and gather information about the tornado and about how to navigate the rebuilding process ahead.

Bob Kleyla, a National Weather Service meteorologist who gathered data and assessed the storm’s path and damage, spoke to those in attendance and detailed the storm’s destruction. He told those in attendance that the severity of this tornado is pretty rare for not only the area but the state. Since 1950 the area has been basically tornado free, with only one recorded in Longmont in the late ’70s. His comparison to the 2008 Windsor tornado illustrated just how lucky everyone was to have survived.

“Fortunately no one was injured; this tornado had the potential to kill people,” Kleyla said, adding that if this storm had hit Berthoud or Longmont, the damage would have been much more severe.

“For 60-plus years there hasn’t been a recorded tornado in this area,” Kleyla said. “So it was a rare event.”

According to Kleyla, the recent tornado first touched down at 6:34 p.m. just south of Ish Reservoir, then traveled west/northwest for 13 minutes. The tornado’s path was five miles long and varied from 50 yards wide to a quarter mile in spots. 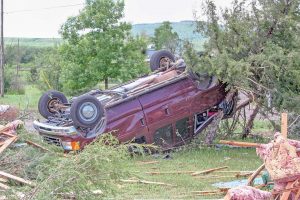 The storm’s 140 mile per hour winds flipped vehicles like toy cars, like this one pictured in the Eyl’s driveway on Blue Mountain Avenue.
Becky Justice-Hemmann / The Surveyor

Lorraine and Bill Eyl, both 74, were in the living room of their home, located at 2600 Blue Mountain Ave., when the tornado warnings came on the television. Their living room window faces east, and Lorraine looked out the window and didn’t see anything other than dark rain clouds.

“We heard that there was a possible tornado in the Berthoud area,” she said. “But we’ve lived here since 1972 and have never seen a tornado in our lives.”

She looked out the window again a few minutes later and saw the condensation funnel cloud moving toward their home.

“I grabbed the dog and went to the basement,” she said.

The thing she remembers is the storm’s volume as the tornado passed.

“We’ve never had a storm that made that much noise,” she said. “It was so loud. I’m sure it was the roof leaving the house.”

The Eyls home was one of the three structures completely destroyed by the storm. They waited out the storm in their basement and Lorraine said she attempted to call 911 but had a difficult time as cell phone coverage was inconsistent. She was able to reach 911 eventually and someone told her that help was on its way.

Ironically, Lorraine said she didn’t feel like she was in any physical danger because the basement was structurally sound, despite the top floor of their home having been ripped to shreds.

“We’re just starting to realize how much danger we were in,” she said.

Emergency responders came quickly, she said; first it was the state patrol, followed by the Berthoud Fire Department. As she was escorted out of her home and walked toward the waiting fire engine, she didn’t look back at the damage.

“We didn’t really see anything because it was getting dark and still raining at the time,” she said.

Miraculously, her dog, a 2-year-old Kerry Blue Terrier, Duffy, and two parrots who were upstairs overnight as the storm continued, survived.

Navigating the cleanup and building process

The Eyls stayed the night at their son’s house in Longmont and are currently staying in a hotel until their situation gets sorted out. Now they’re trying to piece the puzzle of the storm’s aftermath together in order to rebuild.

“You’re trying to understand things you’ve never had to deal with before,” Lorraine said. “Things like what exactly your insurance coverage is and what it’s going to mean for rebuilding.”

Tuesday’s meeting helped the Eyls understand there is a process and organizations to help sort out the mess, but it will be a long process.

“It was helpful knowing that there are all these things available,” she said. “I had no idea what we need.”

Bill and Lorraine’s former daughter-in-law, Michelle Lee, came to assist in gathering information. Lee said she found the meeting and the information available helpful, however, their situation was different than others who needed more immediate assistance.

Several of the folks at Tuesday’s meeting spoke of frustrations after discovering certain flooding issues caused by the storm may not be covered by their insurance. While the Eyls were still assessing the damage to their property and trying to determine what assistance they need.

“Since Larimer County has been through this process, those people know exactly how the system should work and how the process should work,” Lee said.

Larimer County Commissioners Tom Donnelly and Lew Gaiter attended, along with Boulder County Commissioner Deb Gardner. Donnelly told folks about an upcoming discussion at the Tuesday, June 16, meeting to address aid for those affected. He offered few details but said the commissioners would consider expediting the building permit and inspections process to help speed up cleanup and rebuilding.

“I know there are people living in travel trailers right now and they want to get back home,” Donnelly said. “We want to try and make that happen as quickly as we can.”

For residents like the Eyls, now that they’ve had some time to let it settle in, Lorraine is relieved to be alive and is optimistic about the future.

“It’s going to be a long process, and I know there are going to be some ups and downs, but it’ll be OK,” Lorraine said. “We’re so thankful.”