Ukraine crisis hits close to home for one Berthoud Family

Editor’s note: This is the second story in our two-part series on the Ukrainian crisis’ effects on local Ukrainians. The first part of the series ran in the July 10 issue of the Berthoud Weekly Surveyor. 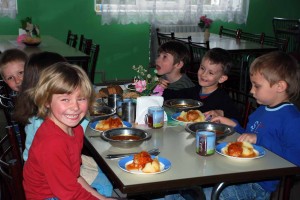 Pictured are some of the children who lived at the Sails of Hope children’s home in Sloviansk, Ukraine.
All photos courtesy of Kris Stoesz.

The crisis in Ukraine had all but fallen off the American media’s radar until last week when a commercial jet liner was shot down over the conflict zone killing all 295 people aboard. For one Berthoud family, however, the conflict has never been far from their thoughts.

Kris and Clarke Stoesz are the founders of Ukraine Orphan Outreach (UOO), an organization they formed in 2006. Their mission is to reach out to the often forgotten group of older kids and to make a difference in their future.

The Stoeszes have four adopted children from Ukraine, and several other area families have followed their lead.

Just last fall, Kris and Clarke were discussing how to purchase a computer for their boys’ transitional home in Ukraine, The House of Grace, and were in the midst of planning to open a girls’ home within the next several years. UOO was looking to the future, but now that future is in serious limbo, and the needs of The House of Grace have become basic, day-to-day essentials. 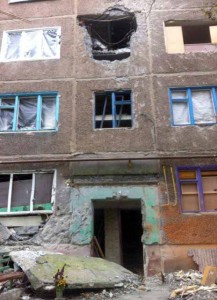 Sails of Hope children’s home in Sloviansk was destroyed in a bombing.

The House of Grace is located in the Donetsk region of Eastern Ukraine, in the same area where the fighting is taking place. There’s no longer electricity at The House of Grace, which is home to a house mom and dad who look after seven teenage boys. The house mom has moved in with her mother-in-law so she can cook meals and then deliver the food via scooter to the boys’ home.

“Imagine these eight men living in a house and depending on this scooter, dodging checkpoints to get across town, to deliver them meals. It’s such a risk,” said Clarke.

As the conflict continues, UOO now seeks to provide basic items to The House of Grace; things like food, socks and gasoline.

The Stoeszes stay in nearly daily contact with a Ukrainian pastor who is involved in community outreach in the country, and they get much of their information on what’s happening on the ground in Eastern Ukraine from him.

“It is dire straits in Eastern Ukraine,” said Clarke. “Government payments have stopped, people don’t have gas because the gas lines have been bombed and shut down. The water system is falling apart. Basically, the infrastructure is falling apart.”

Clarke said that vehicles are being stolen by the rebels, leaving the few citizens with cars without a means of transportation. Anything that could be useful is being garnished by both sides involved in the fighting. 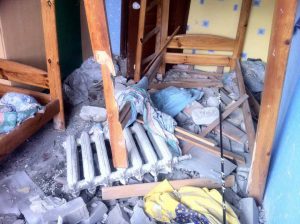 A room in ruins after bombs destroyed much of the Sails of Hope children’s home in Sloviansk, Ukraine.

“People who didn’t have very much to begin with now even have less,” said Clarke. “It’s really tearing at the fabric of how their society works. It’s getting to a point of desperation, and many feel the only option is to flee into the west.”

He reads daily reports of evacuations, including the evacuation of a large orphanage the Stoeszes had visited on one of their trips to Ukraine prior to the conflict. It has been badly bombed and looted and was also being used, for a time, as a stronghold by Russian separatists.

Thankfully, the 100-or-so orphans had been evacuated to living situations in western Ukraine before the building was destroyed. The Stoeszes believe that the damage is so extensive that it will likely never be rebuilt.

The Stoeszes’ adopted daughter, Natalie, age 14, has a biological sister in the Donetsk region. When the fighting started Natalie’s extended family was forced to find a different living situation because there was no more transportation available to her school. They did not, however move out of Donetsk, and in fact live just miles from where Malaysia Airlines Flight 17 was downed.

The House of Grace has considered evacuation, but it’s difficult. They want to keep the “family” together, and the logistics of moving them all is daunting.

Memorial candles and rosaries adorn a stone wall at Maidan Square in Kiev, Ukraine in April.
All photos courtesy of Kris Stoesz

Today, UOO is having trouble getting much-needed funds to Eastern Ukraine and often have to jump through hoops to get the money into the right hands. Banks have been bombed, making money transfers nearly impossible in some cases. According to Clarke, even Paypal has stopped payments into Eastern Ukraine.

On a personal level, while this conflict may feel far away to many Americans, it hits close to the hearts of the Stoeszes adopted Ukrainian children. Natalie, the Stoeszes’ child with family in Donestk, worries for their safety. Another adopted daughter, Samantha, 18, has only been in the United States for three years, and still considers Ukraine her homeland.

“Seeing photos of what’s happening there brings Samantha to tears,” said Kris. “When we went to Ukraine in April, the first thing she wanted to do was to go down to the square where all the initial fighting started. The look on her face while we were there was one of real sadness.”

The downing of Malaysia Airlines Flight 17 may shift the tide in Ukraine, but only time will tell how that tragedy will affect the inflamed region. In the end, no matter who comes out as the victor in Eastern Ukraine, or who is held responsible for Flight 17, there’s no doubt that many lives have been forever altered.

There’s also little doubt that more children are becoming orphans on a weekly basis in a region of the world woefully unable to care for them, so the mission of UOO is more important than ever before. While a new computer and the girls’ home are on hold indefinitely, Ukraine Orphan Outreach will continue to help the people in this war-torn region long after the conflict has passed.

Author’s note: Shortly after the interview for this article was conducted with the Stoesz family, they learned that the boys at The House of Grace have been evacuated to a small village near the Black Sea. The Stoeszes don’t know when the boys will be able to return to the house due to the current, unsettled situation in Eastern Ukraine.