Two Young Marines from Berthoud wanted to cheer on the Wounded Warriors and found a special Paralympics event to be their perfect setting.

Josh Gischel and Seth Anderson, both 12 and rising seventh graders at Turner Middle School, are among the 11 members of Flatirons Young Marines invited to the 2018 Warrior Games. The U.S. Department of Defense brought in several Young Marines to attend the games in early June at the Air Force Academy in Colorado Springs. The games featured 11 sporting events with 300 athletes representing teams from all branches of the military.

“I liked it because we got to do a lot of cheering for them,” said Anderson, who shares a birthday June 4 with Gischel, which they celebrated during the games. “We wanted to show our support because they helped us. They fought for us, and they put their lives at risk for us.” 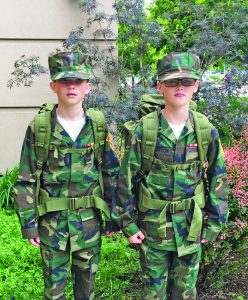 Courtesy photo – Flatirons Young Marines Josh Gischel, left, and Seth Anderson pose May 18 on the day they graduated from boot camp. They are wearing the ribbons they earned just above their left front pocket.

Anderson and Gischel, cadets in Flatirons Young Marines, a youth education and service program in Longmont, attended three days of the nine-day event from June 3 to 5. They watched the winter basketball and women’s volleyball games.

The games are presented through the Wounded Warrior Project based in Jacksonville, Fla., which provides programs and services at no cost to warriors, military personnel injured during service, and their families.

“These guys were in the cheering section for the marines,” said Chris Gischel, Josh’s grandmother and caretaker and the owner of Simply Shabulous in Berthoud. “It was nice because they actually got to meet some of the Wounded Warriors that were competing and got their photos taken with them,” she said.

“It was nice to meet a lot of people who have been through so much to set us free,” Gischel said. “It was a great experience. We got to meet new friends, meet veterans and see a bunch of cool stuff.” 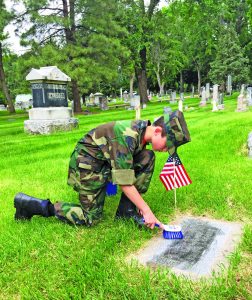 Courtesy photo – Flatirons Young Marine Josh Gischel, 12, of Berthoud, helps provide community service May 28 on Memorial Day. He and the other cadets from his unit washed the headstones of veterans at the Longmont Mountain View Cemetery and participated in the Memorial Day service.

Flatirons Young Marines do volunteer work, march in parades, and present the colors.

“My dad was a marine,” Anderson said. “I wanted to think about becoming a marine and following in my father’s footsteps. It was a good way to look into being a marine and trying to make up my mind about enlisting in the marines.”

Gischel’s great grandfather also was a marine. “I wanted to see if I wanted to enlist,” he said.

Gischel and Anderson recently attended Flatirons Young Marines boot camp for three months, meeting twice a month to learn about the history of the marines, important figures in past American wars, and other American history. They engaged in classroom work and physical-fitness training, meeting all of the requirements to be able to graduate on May 18. They received a uniform and three ribbons; for the basic award, the organized unit trip award, and the physical-fitness award. They also were given the rank of private and can earn additional ribbons for 50 hours of community service and color-guard presentation.

“The boys have the opportunity to progress in rank,” Chris said. “They have the ability to earn higher ranks as they go through the group.”

She found Young Marines keeps the boys accountable to themselves and others.

“The discipline that comes with the group is something that the boys will be able to use and carry with them through life, whether they choose the military or not. They’re taught not only to respect the commanding officer but themselves and their parents.”

Young Marines extends that respect through their community service.

“It’s an amazing opportunity for them to experience what that life is like, especially if there contemplating being in a branch of service, knowing what they went through,” said Heidi Anderson, Seth’s mother. “They’re proud of what they’re doing. It’s a good community builder for them too.”