It didn’t take long for Colton Williams to re-group. Not that he had that much time to. 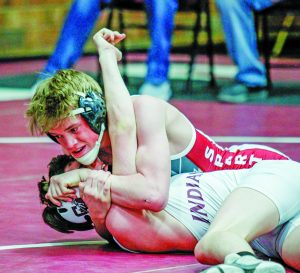 “I just wanted it a lot since I lost that (semi-final) match so close; it just made me want to work harder. I didn’t want to lose any more,” Williams said after winning the third-place bout. “I just wanted to beat that kid.”

Playing in single-day, bracket format tournaments is nothing new for most wrestlers, Williams and his teammates included. Berthoud’s Austyn Binkly won first place in the 145 class and Kyle Conlon did the same in 152s. Yet, as Williams explained, the small window of time between matches affords the athletes just enough time to do a bit more than eat a snack and catch their breath.

“After my matches I usually watch my videos and try to correct the mistakes and make them not happen again,” Williams said, noting the small break between bouts allows time for a psychological refresh as well. “Then I try to get myself mentally ready for my next match. I just have to know I can go out there and do it.”

Williams took control early, scoring two on a takedown 1:12 into the first period. Then it was on. A reverse and a three-point near-fall in the second had Williams ahead, 7-0, after four minutes. Another two for a takedown and a pair of near-falls, the latter of which appeared to have Williams a tad bit frustrated he didn’t get the pin, completed the six-minute, 14-0 major decision win for the Berthoud junior.

Binkly, who took first place in 145s, had to battle through every second of a title match that included overtime. The Berthoud senior, who has been the top-ranked wrestler since the season began in November, earned the 3-1 decision over Cheyenne Mountain’s Kevin Hooks to win yet another weight-class championship.

After battling to a 1-1 tie after all three regulation periods, Hooks and Binkly continued to battle throughout the overtime set. With eight seconds remaining, Binkly got control of Hooks’ legs and, despite his attempts to get away, Binkly held on to secure the two points, literally as the clock expired, to earn the 3-1 win.

“It was a good match, in retrospect, having watched it again, there was a lot of things I could have done differently,” Berthoud’s defending state champion explained. “I don’t think the score was indicative of how much I controlled him in the match.”

Binkly advanced to the title bout with a pin of Skyline’s Nick Silance in 1:05 and then two decision wins over Brewer Winkle of Elizabeth, 7-2 and Cody Dovovan from Loveland High, 4-1, to meet Hooks in the final match of the weekend in the 145 class.

“I was gassing a lot early in the season because I gained 30-pounds for football and I was just feeling awkward. Now I’m getting my movements back. I had to kind of change my style, but now that I’ve got it figured out its just about focusing on the little things and staying healthy.”

Conlon, who has been turning in one stellar performance after another of late, also took the crown on Saturday in the 152 class. The Berthoud junior handled Skyline’s Joe Basil and Esiah Nickles of Elizabeth with seeming ease, pinning the two in 46 and 41 seconds, respectively. In the semifinals it took Conlon a little longer to pin Tristan Diamond of Salida, with the final whistle coming at the 3:33 mark. In the title bout Conlon was in control from the beginning and the final result never much in doubt as he won gold medal with a 7-2 decision over Braden Baumgartner, the No. 1 seed from Weld Central.

As a team, Berthoud took sixth place in the 19-team field with 93 team points. The Spartans will make the short trek to Johnstown for a dual with Roosevelt on Jan. 31 for their next contest.