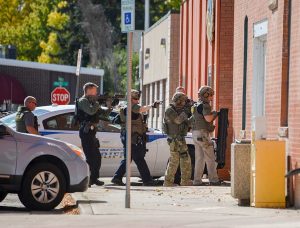 Larimer County SWAT members enter the Subway with a K-9 deputy Tuesday to clear the building of a possible third suspect in the attempted burglary. Two local men were arrested in connection with the incident.
John Gardner / The Surveyor

Mountain Avenue and part of Third Street in Berthoud were closed for close to two hours Tuesday while local authorities searched the Subway restaurant for suspects believed to have broken into the establishment.

Larimer County Sheriff’s Deputies responded to the attempted burglary at the Subway, located at 307 Mountain Avenue in Berthoud, just before 10:30 a.m. Tuesday morning. Authorities say that they were notified of the attempted burglary about 10:28 a.m. when a citizen reported that they had seen two individuals entering the building through a broken window in the alleyway behind the franchise.

According to David Moore, LCSO public information officer, William Duarte IV, 20, and Vincent Chana, 19, both of Berthoud were taken into custody shortly after authorities arrived on scene.

The Subway was closed at the time of the incident which ended just after noon. Several nearby businesses were evacuated or on lockdown while deputies and SWAT members and a K-9 deputy cleared the building for additional suspects as a precaution, but none were found. The sheriff’s office also sent an Everbridge emergency notification to nearby businesses advising them to remain inside until the situation was under control. 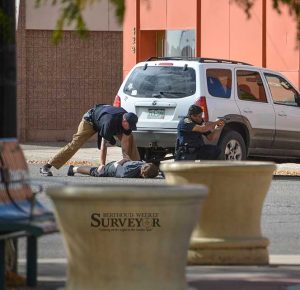 A Larimer County Sheriff’s deputy searches one suspect in custody involved with an alleged burglary at Subway on Mountain Avenue while a second deputy keeps cover on a back door to the building Tuesday morning.
John Gardner / The Surveyor

“It was not clear if any other suspects were inside the building and not visible to deputies so a perimeter was established and traffic was blocked near the building,” Moore said in a press release issues Tuesday night.

Deputies arrived and commanded Duarte and Chana to exit the building. After a brief period, one of the suspects exited the building and was taken into custody. According to authorities, the second male refused to exit for several more minutes but eventually complied and was also arrested.

“We do believe that there were only two involved and those two are in custody,” Moore said.

Chana was evaluated at the scene by medical personnel for minor cuts to his hand but didn’t require treatment.

Both were taken to the Larimer County Detention Center in Fort Collins and booked on charges of second degree burglary – a class 4 felony, criminal mischief, obstruction of a peace officer, and theft. Both were scheduled for first appearance in Larimer County District Court Wednesday. Visit Berthoudsurveyor.com for updates on this story.