Turner students volley for a cause 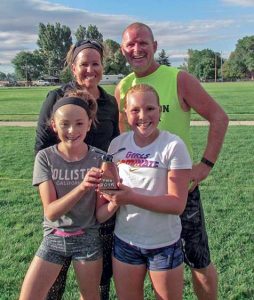 Turner Middle School (TMS) athletic director, Steve Frye, called the outdoor volleyball tournament on Sept. 9 the Farewell to Summer Tournament. Cool weather and a bit of wind made the participants and spectators at the event feel like summer had passed.

The event by the ever-enthusiast Frye was to raise funds for a new practice volleyball net for the school. At the start of the after school event Frye announced $1,000 had been raised.

Participants, including students, their sibling, parents, friends, and even the school’s community service officer, took part in the double-elimination contest. Teams of four vied for the first place trophy.

The tournament is new, and so is the trophy. Frye contacted fellow-teacher Dan Champion to see if his creator space IT students could produce a 3-D 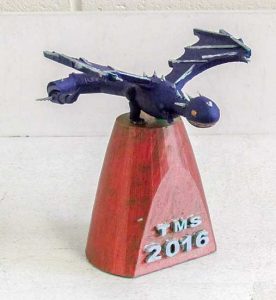 The sports and sciences areas of Turner Middle School collaborated on the trophy for a new volleyball tournament.

printer-made trophy. With little notice, student Ellie Dodd stepped up to make a base and a dragon to be awarded to the winning team. “A fun project,” is what Ellie called her contribution to the event.

After many games, a few falls, and lots of cheering, the winning team emerged. It consisted of Jeremy Weis, Kaylin Waller, Allison Waller and Maddie Dodd.