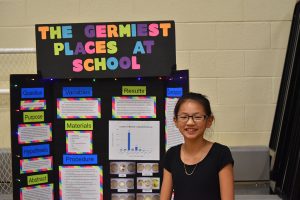 TMS student Genevieve Babyak used the science fair to find the place at school with the most germs. Photo by Bob McDonnell, the Surveyor

Genevieve Babyak set out to find the germiest place in the school. She tested the cleanliness of various parts of the school. This included drinking fountains, classroom tables, door knobs, computer keyboards, toilet seats, computer keyboards and lockers. It turns out the handles and combinations on lockers were the germiest. “It was so surprising,” she said on her findings. Her project garnered first place in the microbiology category. Bella Malherbe won second place in the same category for her research on how bacteria becomes resistance to antibiotics.

Max Horvath explored his interest in perpetual motion. He used one of the toy water-drinking birds that dips its beak in a glass of water. Horvath’s efforts earned the second-place award in the engineering category. 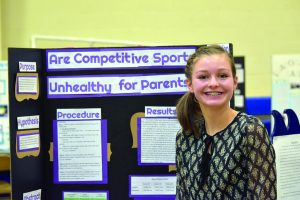 TMS athlete Ellie Yuska used her mother to find out if a parent’s blood pressure rises watching their children compete in sports.
Bob McDonnell / The Surveyor

Ellie Yuska’s study involved how parents of athletes blood pressure is affected by watching their children play sports. She plays basketball, volleyball and softball. Her brother plays football, so Yuska tested her mom’s blood pressure before and then halfway through four football and four volleyball games. Not surprising, seeing her children compete did raise the mom’s blood-pressure numbers, but not to a dangerous level. She knows she gets worked up, but she was kind of surprised,” Yuska said.

Other projects from this year’s TMS eighth graders included dealing with the questions on subjects like, does chewing gum help kids take tests better, the relationship between playing video games and attention spans, what surface works best for lifting fingerprints, the best way to clean pinto beans, and how long it takes fast food to spoil.

Here are the winners from all categories. 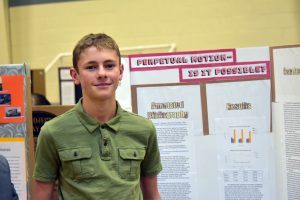 Best of Show went to Jordan Reichhardt in the category of Environmental Science for her project titled “Ocean Acidification.”

Gonzales says all category winners and the best of show recipient will receive invitations to the district’s science fair.