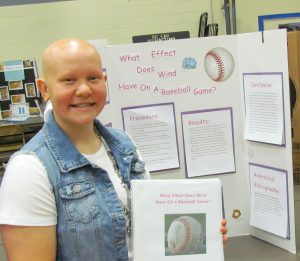 Eighth-grade athlete Ashlynn Balliet explored how wind affects the path of a ball in her TMS Science Fair project.
Bob McDonnell / The Surveyor

On Dec. 10 the Turner Middle School gym hosted 143 science fair exhibits instead of a sporting event. This year’s fair featured only eighth-graders according to Turner teacher and fair coordinator, Kevin Gonzales.

A team of 41 volunteers spent part of their day judging the contest. Those deemed winners by the judges were eligible to compete at the next level that occurs the last week of February at the University of Northern Colorado. Turner Middle School could send 30 participants to the Greeley event and that is what Gonzales hopes.

“I am looking forward to having a full set,” said Gonzales about the winners moving on.

With the broad objective of designing and developing a project using scientific investigation, the range of subject matter displayed in the gym highlighted the creative minds of the TMS students.

“I’ve been playing ball for 10 years,” said Ashlynn Balliet, whose project deals with how wind affects the path a ball takes when pitched. Balliet used a pitching machine and large fan to conduct her experiment.

Also using a sports theme, Jordan Schachterle, a softball player, studied the relationship of the diameter of a ball to how far it will travel. She used a baseball and a football to demonstrate Newton’s second law of motion.

A more sedentary project caught Rex Sheets’ interest. A self-described “gamer,” Sheets chose to record his own heartrate while he played video games. Not surprisingly, the action, shooting, and what Sheets calls the scary games did increase his heartrate.

Safety came into play for Olivia Dunn as her science experiment tested the flammability of various household items; including hair spray, dish soap and hand sanitizer.

Other interesting displays dealt with the topic of what makes a boat float, can plants stop soil erosion, and is your dominant hand more sensitive that your other hand. Additionally, the minds of Turner eighth-graders came up with research on which wood is stronger, how to construct a portable solar oven, and whether or not dogs can understand the English language.

As is usually the case with the science fair, many people from the school and the community volunteered their time. This year’s judges included Kevin Kingston, the school’s community resource officer, and Marty Wilson, who said his adult daughter got him involved. Tuner sixth-grade teacher Dave Hunn judged the contest to check in on some of his former students. Berthoud High School student and athlete, Jackson Hall, among others in the high school’s Cadet Course, spent time at the event.

At the evening awards ceremony, Gonzales thanked the judges, supervisors, set-up crews and the Science Review Committee for their efforts. Additionally, he acknowledged the eighth-grade parents for encouraging and supporting their children and the eighth-grade teaching team for keeping the students motivated and on track.