TSD board members take their seats 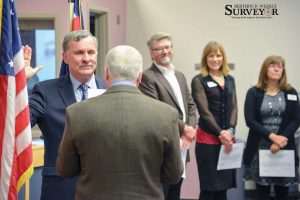 Newly elected Thompson School District Board of Education member David Levy is sworn in at a special organizational meeting on Nov. 19 in Loveland as Jeff Swanty, center, Denise Montagu and Pam Howard, far right, witness in the background.
John Gardner / The Surveyor

Newly elected Thompson School District Board of Education members, Jeff Swanty, David Levy, along with incumbents Pam Howard and Denise Montagu, were officially sworn in at a Nov. 19 meeting at the BOE’s boardroom.

And the feeling from Howard was “relief.”

“It’s such a relief; it really is because it’s been a really difficult two years,” Howard said. “We persevered through the past two years and now I think there’s a lot of promise and hope to just move forward.”

Montagu, too, expressed relief after the swearing in and said she was proud of the community for the way it voted.

“I feel like our community really started to pay attention to what was going on in the community over the last couple of years,” Montagu said.

Levy expressed a similar opinion saying the vote was apparent that the community was unhappy with the way the BOE has operated over the past two years.

“My opinion is the public clearly wanted a change,” Levy said. “They felt that the way the board was doing business was not consistent with how the community feels and it wanted a change.”

Levy added, now that the new board has been seated it’s time to get to work.

“I think the important thing, though, is to ask, ‘what do we do now?’” Levy said.

He’s a firm believer that the board represents the public, ensuring the school district performs at educating students, and he’s ready to get to work.

“That’s our responsibility,” he said. “And I’m anxious to start, dig deep, and do the best job I possibly can.”

Levy said the board won’t have much time to relax as it needs to address some very serious issues, quickly, like the district’s budget.

“These are not political issues, these are real world situations,” Levy said.

“I think we, as a board, need to take a very comprehensive look at everything and exercise our responsibility to the community and work with the superintendent [Stan Scheer] to understand where we are and what needs to be done,” he said.

Surprisingly, former board vice president, Bryce Carlson, and board member Carl Langner were absent from the meeting. According to Scheer, the two notified him they had prior engagements.

The newly elected board, minus Langner and Carlson, selected Lori Hvizda Ward as president; Howard was elected vice president, while Swanty was elected as the board secretary and Montagu will remain as the board treasurer – a position Montagu has held for the past two years.

Hvizda Ward said she really didn’t expect to be elected president but hoped to restore stability and civility to the board. She said she hopes to be able to lead “gently” and promised to respect fellow board member’s input on all matters.

“We’ll get some work done, finally,” she said. “And get back to focusing on students and kids and not on [the board].”