Berthoud has its own mermaid — something that is a familiarity for Weeki Wachee Springs, Fla. 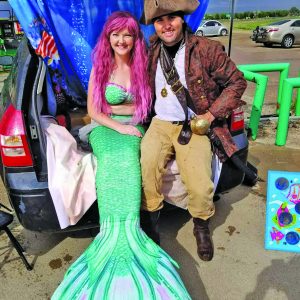 Trina Tolman of Berthoud figured she could bring the concept of a performance mermaid to her hometown, so she made a costume and in January launched Mermaid Trina.

“I thought that was so amazing and thought we could use some mermaid magic in Colorado too,” Tolman said.

Tolman, whose slogan is “waves of wishes,” entertains at birthday and pool parties, libraries, conventions, and corporate and other events — her last visit was at the annual Jo to Go ice cream social June 29 at the Berthoud coffee and ice cream shop.

Tolman heard about how Weeki Wachee Springs mermaids do underwater performances in tanks and, as a swimmer, wanted to do something similar. She can do a couple of tricks, such as blowing bubble kisses underwater, and can provide a variety of pool games. She also offers temporary glitter tattoos, tells stories, sings children’s songs, and plays the ukulele as part of her performance.

For one of her songs, Tolman wrote “Reading in the Ocean” about a mermaid who tries to read a book in the water, but the book gets wet and falls apart. The problem is solved when, with the help of some children, the mermaid finds a library and discovers the magic of reading. She swims up rivers and streams to visit other places where children also might love to read.

“I feel like kids could use a little more magic … go someplace where there’s more active imagination going on,” Tolman said. “What I really like to do is make kids happy.”

Megan Carpenter of La Salle found Tolman to be a hit at a recent children’s birthday party where Tolman played the ukulele and provided glitter tattoos.

“Mermaid Trina is truly one of a kind,” Carpenter said. “She is so patient and kind. … She’s the world’s sweetest person. In a world full of Ariels, she stands out just simply being herself, Mermaid Trina.”

Tolman made her mermaid’s tail by using a monofin used for competitive diving and placing it in a monofin casing to retain the tail shape. She covered the tail with swimsuit fabric, which she painted using fabric paint — she chose blue and green scales with pink on the sides and added some silver, plus pearls on the top of the tail. She also wears a wig with waist-length pink hair and a matching bikini top with scales and glued-on seashells. Once she is in her tail she cannot walk, so her husband Benjamin, dressed as a pirate, carries her if she needs to move.

“I’m pretty much stuck wherever I am at,” Tolman said. “It’s not designed for walking. It’s designed for swimming.”

Tolman purchased a new tail from a company that specializes in mermaid tails, saying her first one was “a horrible purchase from China.”

“This one is done by a professional and is a lot better quality,” Tolman said.

Before becoming a mermaid Tolman earned a general associate’s degree in 2011 from Latter Day Saints Business College in Salt Lake City, Utah. For the next five years she did bookkeeping and accounting work and then stayed at home to raise her daughter. She wanted to take on a part-time job and decided to start a business. She liked how after dressing up as a mermaid during Halloween in 2014 children got excited and wanted to see if her tail was real

“I love dressing up and making kids happy,” Tolman said. “The most fun is watching little kids’ reactions when they first see me. ‘Oh my gosh, Mommy, it’s a real mermaid.’”

Tolman also likes swimming, something she does with her tail to practice and build her core strength.

“I enjoy swimming because I feel graceful,” Tolman said. “It makes you feel good. It makes you happy. It feels magical doing it with a tail.”

For more information about Mermaid Trina, go to mermaidtrina.com.