Town of Berthoud to fog for mosquitoes next week

Next week, on Monday July 24 and Tuesday July 25, at 10 p.m. or later, the Town of Berthoud has made the decision to fog for mosquitoes for the first time in 2017. 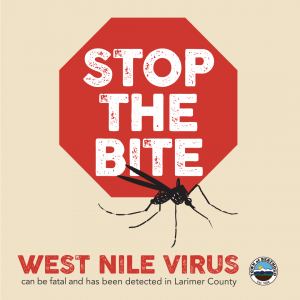 A Vector Index (VI) of .5, which the town established as a designated threshold to decide when fogging would be utilized, has been exceeded and is currently at .874, a number averaged between four separate traps that are tested weekly at a Colorado State University lab. The VI is calculated by measuring the number of mosquitoes and the rate of those infected with West Nile Virus (WNV). The trap at Loveland Reservoir has tested positive for WNV the past three weeks.

Trucks equipped to spray a fine mist of permethrin-based products will travel throughout the town. The treatment will work best being executed over two nights, according to Vector Disease Control International (VDCI) the company contracted with the Town of Berthoud to help mitigate the mosquito population through administering larvicide first and foremost, followed by fogging when it is deemed necessary for public safety.

According to a press release from the Town, “…residents interested in minimizing their exposure are encouraged to stay indoors and keep doors and windows closed for 30 to 60 minutes after spraying. It is recommended residents bring pets indoors as well. Residents can further minimize pesticide exposure by covering organic gardens, ponds, and water features with a cloth sheet or tarp.”

Berthoud officials were advised by VDCI not to schedule the fogging on Fridays as that is when many people in the community are outside. According to a town resolution, a 48-hour notice is required before adult mosquito control is utilized but, according to an email from Town Administrator Mike Hart, town officials wanted more time to ensure the population was notified before the fogging took place.

Due to the number of mosquitoes and the fact several traps in the area have tested positive for WNV, Larimer County officials are recommending Fort Collin’s schedule adult mosquito control measures by fogging next week as well.

WNV is a serious and sometimes fatal disease spread by the Culex mosquito. One in five people infected will develop a fever along with other symptoms like headache, body aches, joint pains, vomiting, diarrhea or rash. Less than one percent of those infected develop serious neurological illness such as encephalitis or meningitis, which is inflammation of the brain or surrounding tissue. In 2016 there were 149 reported cases of WNV in Colorado, including eight deaths.

To help reduce the risk of contracting the disease the Centers for Disease Control (CDC) recommends avoiding being outside during dawn and dusk when the mosquitoes are active, but if you must be out during these times to wear long loose-fitting clothing and apply insect repellent. The CDC also suggests installing or repairing screens on windows and doors or use air conditioning.

You can help reduce the numbers of mosquitoes around your home by emptying any standing water where mosquitoes lay their eggs from areas like flowerpots, gutters, buckets, pool covers, pet water dishes, discarded tires, birdbaths and any other containers on a regular basis.