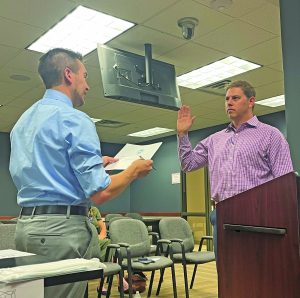 Photo by Dan Karpiel – Berthoud resident Jeff Butler takes the oath of office from Town Clerk Christian Samora at Tuesday’s special meeting of the board of trustees. Butler will serve out the remainder of the term, through April 2024, that was vacated by the resignation of former Trustee Lonnie Stevens.

At a special meeting of the Berthoud Board of Trustees on Tuesday evening, the board voted to fill the vacant seat on the board with Berthoud resident Jeff Butler, who previously served on the town’s Planning Commission. Butler was one of four candidates, alongside Carolyn Hobson, Alexander Johnson and Ellyn Rush who submitted applications for the opening. Butler will serve out the remainder of the term, through April 2024, of former Trustee Lonnie Stevens, who resigned in May.

The board decided to limit the candidate pool to those residents who had run unsuccessfully in the most recent municipal election in April as well as those who currently serve on one of the town’s citizen volunteer committees. The appointment of Butler creates an opening on the town’s Planning Commission that will be filled in the near future.

“It means a lot to me, it’s overwhelming that I have the trust and confidence of the town board. I take this duty to serve very seriously, and I look forward to the betterment and the improvement of our town which I so dearly love,” Butler said.

Before Tuesday’s meeting, all four candidates submitted applications outlining their credentials, experience and vision that were reviewed by the trustees and verified by town staff that all four were legally eligible to serve. On Tuesday night, each of the four candidates in turn stood before the board and answered questions from the six trustees. Each candidate was asked the same four questions while the other three were sequesters in an office out of earshot on the board room.

Following the round of questions, all four returned and Town Clerk Christian Samora distributed ballots to the six board members who then each listed their top two choices. Butler received support from all six, the only candidate to do so, with Hobson receiving the support of five trustees and Johnson receiving the vote of one. Following the announcement of the results, Mayor Will Karspeck thanked each of the four candidates for their interest in serving on the board as well as their service to the community at large. Butler then took the oath of office from Clerk Samora.

“I have seriously debated running the last few elections but decided the time wasn’t right. But what happened, on a personal level, my wife and I had COVID last year and we were both pretty sick, then I had a shoulder injury from a car accident and when I was laid up, I had time to think about life at a deeper level,” Butler explained. “Ultimately it kept leading back to the same question of how can I give back, how can I contribute, how can I help others, and for me that’s public service in a governance capacity that I have some experience with running businesses, serving on trade boards and the planning commission and this is the next step.”

The board will convene for their next meeting on Tuesday, July 26.