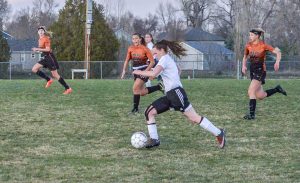 Berthoud striker Jade Glasser races toward the goal with Mead defenders in pursuit during the first period of the March 30 game at Berthoud High School. Despite the Spartans’ best efforts, the game ended in a 0-0 tie after two overtime periods.
John Gardner / The Surveyor

As Berthoud High School girls’ soccer coach, Corbett Leatherwood, made his way back to the team after shaking hands with Mead coach Michael Schulz, he told his team to pack up their stuff and “let’s get out of here.”

It wasn’t a statement of disappointment, however, it was a statement of exhaustion after the Spartans played 100 minutes of soccer including two over time periods, ultimately ending in an 0-0 tie.

And Leatherwood was proud of his team’s effort.

“The victory here for us was the emotional battle it took to face a strong opponent in Mead, which historically, has always been a strong opponent,” Leatherwood said. “My smile was from the fact that the girls played every second of the game and I couldn’t have asked for more than that.”

The score doesn’t describe the Spartans’ hard-fought game against the Tri-Valley Conference rivals, but the tie is better than a loss and the Spartans lost nothing Monday night as they fought all the way to the end.

“Everyone gave 100 percent effort,” Leatherwood said. “We had high energy and I was pleased with their attitude and unity they showed.” 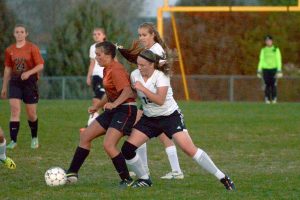 In the first half, the Spartans played conservatively and did more defending from Mead’s offensive attack than they did offensively themselves. But that all changed in the second half as the Spartans managed to spend most of the second period in Mead’s territory. Coach Leatherwood told his team at halftime that he wanted to see more shots on goal in the second half.

“And they responded quite well,” he added.

Berthoud junior striker Jade Glasser had several shots on goal and kept the offensive up throughout the end of regulation and through two overtime periods. But it was Berthoud’s defense and a phenominal game by goalie Hayley Leatherwood, who recorded 11 saves, that kept the Spartans in the game, including a laid-out stop 2 minutes into the second overtime with the game on the line.

“It felt really good,” Hayley said of the stop. “I just want to be a good team member and when I get the chance to make a save, I do the best I can to support my team and the effort they are giving.”

Berthoud’s Courtney DeMoudt battles against a Mead defender during the first half of the March 30 game.
John Gardner / The Surveyor

Hayley credited the Spartans’ stingy defense as a key part in the tie.

“My defense worked hard and I’m just glad I was able to do my part,” she said.

Coach Leatherwood said that Hayley, who’s one of two daughters who play on the team, has a quick reaction time that makes her a force in the net.

“One of her strengths is her quickness, her ability to go from zero to 60,” he said.

With the tie, the Spartans find themselves 4-3-1 midway through the season, and 2-1-1 in conference play. So far, even with a first year coach and a new playing style, the girls are doing pretty well. And their dedication to training is paying off, Leatherwood said.

“They’ve managed to accept me very quickly and I’m very pleased with their hard work and ethic,” coach Leatherwood said.

The Spartans played a home game against Mountain View on April 1. Those results on available online at Berthoudsurveyor.com. The team doesn’t return to the field until after spring break when the Spartans host Holy Family on April 13.