For Berthoud sports, 2018 was a busy year. Below are our picks for the top-10 sports stories of the year, listed in chronological order. 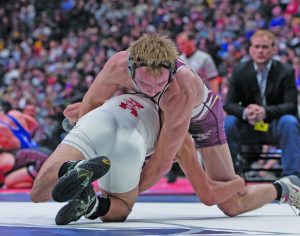 Austyn Binkly entered the 2018 state tournament as regional champion, and the junior shined at the Pepsi Center. Binkly joined an elite group of Berthoud athletes as a state champion, taking home the gold medal with an 8-4 decision over Ariel Rodriguez of Eaton High.

Binkly, who had medaled at state as both a freshman and sophomore, brought a business-like approach – complete with a three-piece suit and briefcase – to title night, seeking the title that had eluded him the two prior years. As Binkly explained after winning the championship bout, “What I’ve always trained for is one more match. I’ve always been one match away from my goal – all those extra workouts, all that extra time, it’s something that paid off.”

The 4×100 meter boys track and field team – Trinity Buckley, Ryan Schmad, Connor Siruta and Jake Rafferty – that had been running together since junior high, won first place at the state meet by a comfortable half-second margin. In the preliminaries at the state meet the group broke the Berthoud High School (BHS) record in the same event. The four talked about how their friendships off the track played a huge part in their success.

As Schmad said, “Not only are we teammates out here, but we’re friends, and when you know the guy you’re handing the baton off to or running with, it really, really helps.” Siruta agreed saying, “It’s the chemistry aspect of it. We’re all close, and that friendship makes it easier to want to work and want to do well with these guys. Since you have a personal relationship you want to see them do well and they want to see you do well, so it just helps uplift everything.”

Over the course of the spring, the BHS track and field team broke five school records. Sophomore Emily Cavey broke the record in the discus throw, Ryan Schmad broke a record in the 400 run and Voth broke his own record, which he set in 2017, in the triple jump. The boys 4×100 relay team (Buckley, Schmad, Siruta and Rafferty) and 4×200 (Buckley, Schmad, Rafferty, Voth) also broke the records in that pair of events.

For the Berthoud baseball team, 2018 was an historic year. The Spartans reached the postseason for the first time since 1999, before any of team’s players were born. Berthoud finished the regular season with an 11-8 record to earn the berth in the state tournament.

The Spartans won their opening playoff game by a 6-4 final score to Thomas Jefferson behind a legendary pitching performance from DeSousa, who struck out a school-record postseason 15 batters in six innings of work. Berthoud’s season came to an earlier-than-desired end a couple of hours later at the hands of 4A No. 2-ranked Valor Christian, but the success the team enjoyed will be long remembered. Four players from the team signed to continue their baseball careers in college, while senior first baseman C.J. Balliet was recognized as an All-State honorable mention and took home Co-Male Athlete of the Year honors at last year’s Berthoud Sports Hall of Fame banquet.

Berthoud’s Paige Farnam earned the right to compete in the national Junior Olympics last summer in Greensboro, N.C. The now seventh grader at Turner Middle School competed in her signature events, the 400 run and the long jump. Like most young people, Farnam got involved in sports just to make friends and have fun, but her extraordinary talents have already brought home more medals and accolades than she can count. At the national Junior Olympics Farnam posted a personal record, 15’0.5” in the long jump, good enough for an 11th-place finish. The day prior, Farnam took 29th place in the 400  run with a time of 1:02:48, her second-best time ever. Farnam said her favorite part of the weekend was being there to cheer on her teammates.

After a great deal of planning, preparation, design and construction, the new TPC Colorado at Heron Lakes golf course opened last summer. TPC Colorado is the first golf course ever built in Berthoud and the first new course to open in Colorado in a decade. The course opened its doors last spring to members and opened to the general public in the fall. While the facility is still under construction, current amenities in addition to the course include a 5,500 square-foot clubhouse, which includes a pro shop and café. The course itself features 18 unique holes that test golfers of all abilities, ranging from beginners to pros. From July 8-14, 2019, TPC Colorado will host a professional tournament, the Web.com tour event The TPC Colorado Championship at Heron Lakes.

Over the course of the calendar year, 14 BHS student athletes signed National Letters of Intent to continue their athletic careers in college.

Even by the high standards the program has set for itself over the years, the 2018 season was a great one for the BHS softball team. After completing the regular season with a 15-9 overall record, Berthoud swept the completion in the opening round of the postseason to win the regional championship and punch their tickets to the state tournament. The Lady Spartans won a pair of thrilling victories over Pueblo West and Pueblo County – rallying from a 9-1 deficit to beat West 11-9 and then besting No. 1 seed County by a 4-2 final – on the opening day of the state tourney before ultimately falling to Mountain View 2-0 in the state semi-finals.

After a long tenure with the BHS football team that included time as a player, assistant coach and finally, for the last five seasons, as head coach, Troy Diffendaffer decided to hang up his whistle in December, retiring from the Spartan football program. In his final two seasons as BHS head coach, Diffendaffer’s Spartans made the state playoffs and the coach was invited to coach the All-State game last summer.

On retiring from the football team, Diffendaffer explained the time was right to hand over the reins and begin a new adventure, saying, “It’s just kind of wanting to go to open more doors, and you have to kind of step away from one job to go to a different opportunity, and that’s where the decision came.”

BHS football and basketball player, Jake Lozinski, has been invited to play in the prestigious Blue-Grey All-American Bowl game at Raymond James Stadium, home of the NFL’s Tampa Bay Buccaneers. After competing in a combined event which tested players’ athletic abilities and football acumen, Lozinski, who led the Berthoud football team in all-purpose yards each of the last two seasons, was named All-Conference and selected as a team captain this fall, will play wide receiver for the west region’s grey team that will face off with the east team in early January.