TMS student spells out a W-I-N 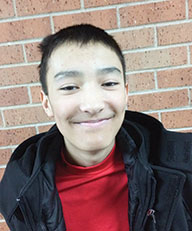 Adrian Reghitto, an eighth-grader at Turner Middle School, is no stranger to spelling difficult words and spelling contests. His efforts garnered him a top-15 finish at the March 11 Denver Post Colorado State Spelling Bee.

As a fifth grader, Reghitto won the elementary school division of the district spelling bee. He also qualified for the district contest as a sixth- and seventh-grader.

His path to the highest level of spelling competition in the state this year was not an easy one. Reghitto placed third at the Thompson School District Spelling Bee in January. The top six qualifiers from that contest move on to the state competition.

For the finals, Reghitto joined more than 270 other students at the University of Denver. First the group took written tests. The spelling bee now incorporates vocabulary. Students are not just memorizing word spellings — they need to learn the meanings of them as well.

After the written tests, the top 33 students went on to the oral rounds. This is more of a traditional spelling bee where contestants take turns spelling. A missed word gets the competitor eliminated from the competition.

Adrian made it through more than two-and-a-half hours of a competition that lasted for four hours. Among the words he spelled correctly during that time were “bildungsroman,” “quinine” and “tahini.” In the 13th round, the word “pandowdy” tripped him up.

“A huge deal,” is how Turner spelling team coach, Lisa Paradise, characterized Reghitto’s performance. “To my knowledge he is the first Turner student to ever make the stage at state.” She added that in her 11 years as a volunteer coach, this is the first Turner student to advance to the oral round in the finals. She said the larger Denver area schools usually dominate the competition.

Training for the spelling bee starts in September. Paradise, along with her co-coach, Jane Vielehr, meet with the potential spellers once a week, then up to twice a week starting in December.

The two volunteer coaches use a team approach in preparing the students, rather than individual training. “Kids work together,” Paradise said. This technique works, since seven Turner students were among the 21 spellers who advanced to the oral round at the district level.

Reghitto is the son of Drs. Mike and Charmaine Reghitto. His mother says he has an innate ability to learn. He taught himself to read when he was 3 years old, she stated. Although an eighth-grader, Reghitto goes to the high school for geometry and physics classes.

He attributed his success this year to doing more studying of words and their origin, and also credits his parents and coaches for their assistance.

Eighth grade is the last year students can compete in the spelling bee program; however, it will not be the last award Adrian Reghitto wins.