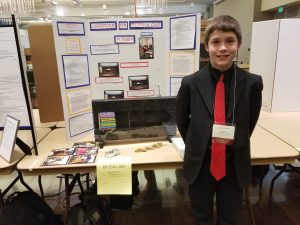 Photo by Amy Kossler – Jacob Kossler, 12, a sixth-grader at Turner Middle School, stands in front of his science fair project, Laminar or Turbulent Flow?, which received five Special Awards during the Colorado Science and Engineering Fair in April.

“There is a lot of support from industries and professional societies for the state science fair, which is neat to see,” said John Kossler, Jacob’s father—his mother is Amy.

From there, Jacob advanced to the Colorado Science and Engineering Fair April 7-8 at Colorado State University. He received four of the 350 Grand and Special Awards presented by industry and professional societies.

Jacob’s awards, totaling $700, are for his project Laminar or Turbulent Flow?, one of 215 in the state competition for grades 3-6. His awards include the Pioneers of Science Awards-Francis Arnold Award, $50; the American Institute of Chemical Engineers-Excellence in Chemical Engineering Award, $200; the American Institute of Aeronautics & Astronautics-AAIA Aeronautics and Astronautics Award, Arduino Starter kit, value $100; the American Vacuum Society-Excellence in Physical Sciences & Engineering Award, $100 with $100 matching award to teacher/sponsor; and the Lockheed Martin-Lockheed Martin Aerospace Award, certificate, $150.

Kossler also won a nomination to compete nationally in Broadcom MASTERS, the Society for Science’s national middle school STEM competition. This year, 1,500 students are invited to submit applications, due June 15. The applications will be narrowed to the top 300 MASTERS, then the 30 finalists who will be able to compete in nationals Oct. 29 in Washington, D.C.

Jacob competed in the engineering category with his project, where he evaluated laminar versus turbulent flow. Laminar flow is a smooth and collected air movement, compared with turbulent flow that’s more chaotic with lines of air mixing and crossing each other, he said. He evaluated five different wing shapes to determine which is best for laminar flow, including the typical shape, as well as a flat strip, a block, a bump with a raised surface on top and symmetrical which is the same on both sides. He built a wind tunnel, using designs he found from the NASA Glenn Research Center to test the airflow over the wings.

“I really love aerospace engineering, especially helicopters, so I did a passion project on it,” said Jacob, who likes building airplanes and hover crafts. “That is my main goal in life is to become an aerospace engineer.”

Jacob plans to study engineering and wants to work inside helicopters. He won fourth place in the fourth grade when he competed in the District Science Fair with his project that evaluated which shapes make the strongest bridges.

“It’s always great to see a lot of passion and a lot of hard work pay off,” John said. “What we saw over and over from the judges, they were impressed with his understanding of the science behind the project and was able to communicate his understanding. We’re very proud of him for that.”

Jacob didn’t need much encouragement to work on his project, John said.

“He’s pretty passionate about it. He’s pretty self-motivated, which makes us proud as well.”

Science fairs are a way for students to learn more about a topic beyond what they learn in school and to potentially identify a career direction, John said.

“It helps them find something fun to do and find their future career and what they want to do in life,” John said.