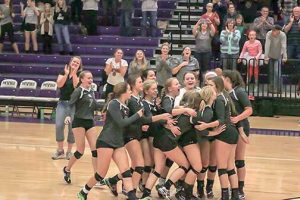 Berthoud Spartans celebrate their victory at the 4A Region 8 championships at Mountain View High School in Loveland on Nov. 4. The Spartans capped a great season with the regional championship and now head into the state tournament as the No. 8 seed. The Spartans face No. 1 seed Lewis-Palmer Friday.
Paula Megenhardt / The Surveyor

More than any other sport, volleyball is a game of momentum. That fact could not have been more clearly displayed than it was at the regional championships on Nov. 4 at Mountain View High School (MVHS) in Loveland.

Berthoud − who had won hosting rights for regionals as the eight seed but saw the tournament relocated to MVHS when Berthoud High School was closed − battled back from a 2-0 deficit to the get the 3-2 win (25-27, 21-25, 30-32, 25-10, 15-10) over the Mountain Lions in what was nothing short of an epic match. The victory gave Berthoud their third regional championship in as many years and secures a spot for the Lady Spartans in the state tournament that will be played this coming weekend in Denver.

Berthoud advanced to the championship match with Mountain View by making mincemeat out of 29-seed Glenwood Springs in a 3-0 sweep (25-8. 25-17, 25-8). Yet the Lady Spartans began the championship match uncharacteristically lackadaisical and mistake-prone and allowed Mountain View to take the first two sets. Berthoud trailed throughout the heart-stopping third set, even facing match point when trailing 24-23 and later 28-27, but pulled the pendulum of momentum back in their favor to eek-out the 32-30 win and then cruised to comfortable wins in the final two sets.

“Heart,” was Berthoud Head Coach Daisha Agho’s answer when asked after the match what it was that allowed her team to wrest the momentum from Mountain View and ultimately claim the regional crown. “This team went through a lot this week. I think those first sets showed a lot of the numbness and emotion these girls felt, but they were able to pull it together. I knew it was going to be a struggle, and they finally showed up.”

Mountain View carried the momentum they got with their wins in the first two sets into the third, holding leads of 4-1, then 8-3, then 17-13 and eventually match-point 24-23. “At that point in the third set, when it’s 24-23 and we’re down two games, I think ‘oh my gosh, we’re not going to go to state and this is going to be my last time on the court,’” senior Shay Pierick said.

Star outside hitter Julie Ward got the kill for Berthoud on Mountain View’s next serve, preserving the Lady Spartans season. Jessa Megenhardt did likewise on the next rally, after freshman Cas Berry digged a Mountain View attack on Berthoud’s right side to give the Lady Spartans a 25-24 lead, their first of the set. After Mountain View responded to tie the score, Megenhardt setup Abi Lutz on the left side, and the junior’s attack cleared the Lady Lions block, putting Berthoud back in front 26-25.

Lutz was singled out for praise from Agho, who said after the game, “The other piece that was a huge factor, and I cannot give her enough props right now, is Abi Lutz … she did the job I needed her to do, she is the reason we won that third set, she truly is. She really turned the team’s mentality, the team’s desire to win, and that fight. Just her presence on the court and that positive attitude she showed … stepping on the court in a very tough situation and doing what she did was phenomenal.”

The teams traded points back and forth and Ward registered two more kills, the second of which gave Berthoud a 31-30 lead. On Berry’s subsequent serve, the Lady Lions return attack went wide, ricocheting off the net and giving Berthoud the 32-30 win.

While Berthoud had some struggles in the first two sets overcoming Mountain View’s block, Agho and several players all remarked the hurdles to overcome were of the mental, not the physical, variety. “I don’t think they really knew just how much this week had affected them. I don’t think they realized how much not being at home would affect them. I thought it was a shocker to them,” Agho said referencing the tragic death of a BHS student the day prior.

Added Pierick, “I think we found our groove, we finally pulled our heads out and we wanted to go to state. That was our goal, we collected ourselves, came out strong and played Spartan ball.” The senior’s comments were echoed by Ward, who said, “We did go through a little bit of a slump, but we realized we needed to get at it and get going if we’re going to reach our goals. Mentally, we realized we all needed to be all-in.”

The Lady Spartans rode the positive energy they garnered from their win in the third set into the fourth and fifth. Berthoud took command of the fourth set early, establishing a 6-2 lead. After Mountain View answered with a short two-point rally, Berthoud rattled off 14 straight with Trinity Penny serving to take the wind out of the Lady Lions sails and win the set by a comfortable 25-10 final. In the fifth and final set Berthoud’s play was not quite as scintillating as it was in the fourth, but the outcome was never in doubt as they took the set by a 15-10 final.

Several Berthoud players explained that having to battle the full five sets against Mountain View will be of aid to the team when they face the best of the best at state. As freshman Teagan Holmes explained, “We can remember back to this and know that we shouldn’t dig holes for ourselves, but we also know if we get down we can dig our way out, we know what kind of a team we are and how hard we can fight.”

The 12-team 4A state tournament will begin with pool play on Friday that continues through Saturday morning. The winners of each of the four three-team pools will advance to the semifinals Saturday afternoon. Berthoud will face-off with undefeated and No. 1-ranked Lewis Palmer at 3:30 p.m. on Friday and will then play Tri-Valley Conference rival Windsor on Saturday at 9:30 a.m. All matches will be held at the Denver Coliseum; start times are approximate.