With a smaller field comes tougher competition. That fact was on clear display at this past weekend’s Colorado 3A state high school wrestling championships held this year in Pueblo. 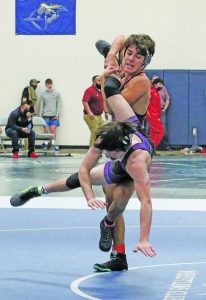 Photo by Angie Purdy – Berthoud’s Evan Torres wrestling in the regional championship on March 6 in Severance. Torres was one of four Spartans who placed in the top-two at regionals and competed at last weekend’s state championships in Pueblo.

Due to the pandemic, this year’s state pool was reduced – by half – for each weight class from the usual 16 wrestlers (four qualifiers from each of the state’s four regions) to just eight with only the top-two placers at the regional championships qualifying for the state meet. State was held this year in a sprint format – all matches contested over the course of a single day – rather than the usual three-day marathon event.

The Berthoud High School (BHS) wrestling team, always a top-tier program, qualified four wrestlers for this year’s state meet. Sophomores Wil Moneypenny (132lbs) and Evan Torres (152) and seniors Talyn Massie (145) and Peter Bullet (220) made the long trek to Pueblo to represent the Spartans at state. Moneypenny and Bullet entered as regional champions while Torres and Massie qualified for state as runners-up at regionals.

The opening round, which pitted regional champions verses runners-up in weight class, was not kind to Berthoud. All four Spartans suffered defeats in their first matches of the day, sending all four to the back half of bracket where they would each chase a bronze medal.

Moneypenny, who entered state undefeated at 20-0, dropped his first match of the day via fall in 1:13 to eventual state runner-up Trevor Maestas of Alamosa. Moneypenny recovered very nicely, however, winning his next two bouts in convincing fashion. Berthoud’s sophomore standout pinned Austin Featherman in just 1:36 and then won an 8-0 major decision over Jordan Atencio to advance to the third-place match. While Moneypenny suffered a defeat at the hands of Johnathan Malovich of Platte Valley, his fourth-place finish represents his second time on the state podium in as many years, an impressive accomplishment.

Bullet, a senior who also entered state as a regional champion, left it all on the mat in his final time donning a BHS singlet. After suffering a defeat via fall in 2:13 to Weld Central’s

Zayne Stam, who ultimately took third, Bullet came roaring back. The senior 220 pounder won with a pin in 3:00 over Hezekiah Mosley to advance to the consolation semifinals. A defeat to Tanner Eide placed Bullet in the fifth-place match against Zaquorya Bernal. In a hard-fought match Bullet earned a 7-3 win to walk off the mat as a winner in the final match of his high school career.

Massie and Torres both entered the state tourney with the unenviable task of having to face the top-seeded wrestler in their respective weight classes. Both turned in valiant efforts but were defeated by their division’s ultimate state champions. Massie was defeated by Zane Rankin of Alamosa but earned sixth place wrestling through the consolation bracket. Torres was pinned in 1:22 by Isiah Rios of Valley who won the 152lb title in dominant fashion and then saw his day come to an end when he was handed a 9-2 defeat by Wesley Dubois who finished on the podium in sixth place.