Three Berthoud Robotics teams are headed to the VEX Robotics Worlds Championship this year to compete with their robots in an international challenge.

One of the teams, Awkward Cats, won the Design Award at the VEX IQ Elementary School State Championship Feb. 26 and is headed to Worlds in Dallas, Texas. The VEX Robotics Worlds Championship for elementary teams is May 10-12 and will be presented by the Northrop Grumman Foundation. 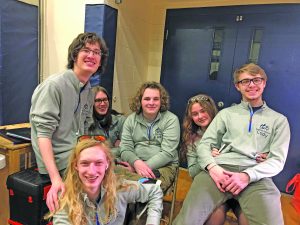 “It took lots of hard work and many competitions to win to get to state,” said Kasey Miller, secretary of Berthoud Robotics, a nonprofit club loosely affiliated with Berthoud area schools, and coach of Awkward Cats and co-coach of Poorly Assembled, a high school robotics team.

“It’s that experience of competing on a really big scale,” Miller said. “It’s an easy, open way for students to get started in robotics. … It teaches them critical thinking skills and problem-solving skills. It definitely increases their social awareness skills.” 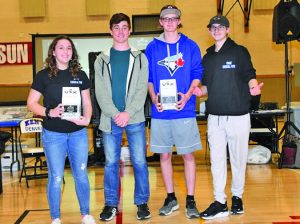 The game challenges this season include Pitching In for the elementary and middle school teams and Tipping Point at the high school level. Pitching In consists of 22 balls on a playing field that have to be placed in goals and corrals, and Tipping Point’s playing field has 72 rings and seven mobile goals that have to be placed on a balanced platform.

To carry out the challenges, the student work in teams to design, build and program a robot that carries out the tasks on the playing field, autonomously for 15 seconds and driver-controlled for 1 minute, 45 seconds. The teams use plastic or metal pieces from a kit to build their robots, which consists of smart motors, a radio controller and sensors connected to the controller.

“They design a robot to fit the challenge,” Miller said. “It’s all on them. They don’t have any adult assistance. We can teach them ideas, model ideas, but we can’t help them build or program.” 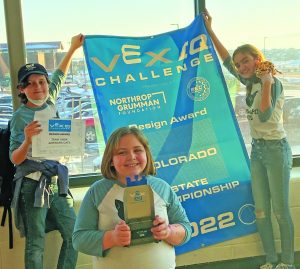 The teams work in alliances of two against another two-team alliance in elimination rounds during competition. They’re interviewed individually by judges and present their engineering notebooks as part of the interviewing process.

“The idea is if somebody else picked up your engineering notebook, they would be able to build the same robot you have because it’s so well-documented in that notebook,” Miller said.

Awkward Cats won the Design Award for notebook presentation, which includes the documentation of the designing, coding, programming and engineering processes used by the team. The team also placed in Worlds last year but had to compete virtually. This is the first time for an elementary team to go to Worlds in person—the team has been together for four years.

“They’re always pushing themselves,” Miller said. “They’re so determined to make sure what they’re doing is really well done and does a good job once they get to competition. … It’s a lot of confidence and support in each other that they have as a team.”

The Worlds Championship will be the last one for Poorly Assembled, an all-senior team with four of the original members competing together for the last six years.

“None of these teams could compete at this level without wonderful parental support,” Miller said. “Robotics requires hours and hours during the regular season and usually runs year round as the new game challenge is announced at the end of Worlds.”

The Berthoud Community Foundation and the City of Berthoud provided Berthoud Robotics with support through grants and a communal space in which to practice.