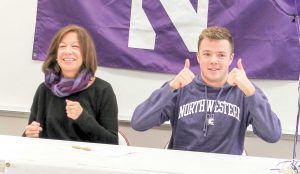 Berthoud High School student and swimmer Jack Thorne and his mother, Jodi Juskie, expresses their
excitement after Jack committed to swim at Northwestern University in Illinois, on Nov. 13 at BHS. Thorne
swims with the Thompson Valley High School and the Loveland Swim Clubs and is a two-time defending 4A
state champion in the 100-yard backstroke and defending state champion in the 100 butterfly.
Photo courtesy of Kim Skoric

Berthoud High School senior Jack Thorne will swim in the Big Ten Conference for the Northwestern Wildcats next year. Thorne, the most accomplished male swimmer ever from Berthoud, made official visits to the University of Wisconsin, Penn State and the University of Virginia before choosing the Wildcats, whose campus sits along the shores of Lake Michigan.

“The first day colleges can call you is July 1, after your junior year,” said Thorne. “It’s hard to explain how good it felt for Northwestern to immediately call me on that first day they could contact student athletes.”

It wasn’t an easy decision, either.

“It was a difficult choice between Wisconsin and Northwestern,” Thorne said. “It came down to how comfortable I felt with the team and the coaches and ultimately it was Northwestern.”

Thorne competes at the highest level nationally and just missed the Olympic trials by 2.5 seconds in the 400 freestyle. The 400 free isn’t even his strongest event, so as he matures and his body becomes stronger and more explosive the pool has no boundaries for Thorne as a national – and potentially international – swimmer.

The success Thorne’s enjoyed hasn’t come without challenges and some very committed hours in the pool. Swimmers hit the pool long before the sun comes up, make it to class with their hair still wet and finish their day back in the water, training again.

More impressively, last season Thorne struggled with a shoulder injury and still won the state title in the 100 butterfly; a stroke that puts tremendous torque on the shoulder.

Thorne will bring the Wildcats strengths beyond this state title swimming discipline; he is also an outstanding 400 individual medley swimmer and should benefit Northwestern in many ways as they compete in the tough Big Ten Conference.