This summer go under the sea at BDT 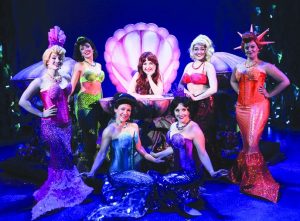 Photo by Glenn Ross – Lillian Buonocore as Ariel the mermaid princess is surrounded by her mersisters on the set of Boulder Dinner Theater’s production of Disney’s “The Little Mermaid.”

Boulder Dinner Theater (BDT) has taken on Disney’s The Little Mermaid, an ambitious and wonderful family-friendly production, with gusto. The stage musical is based on the animated classic adaptation of Hans Christian Anderson’s tale of a mermaid who gives up her voice to become human. I was accompanied to the performance by my mom Karen and a mermaid connoisseur, my 9-year-old cousin Ada.

The day after Thanksgiving 1989, my parents took my brother and me to see Disney’s The Little Mermaid. I was 6-years-old and I remember falling in love with not only the characters but the clever and catchy music composed by Alan Menken and lyrics by Howard Ashman. I wore the soundtrack cassette tape out and to this day could potentially quote the entire movie as I watched the VHS tape an estimated 1 million and four times. This musical adventure holds a special place in many hearts so BDT has a lot to live up to – which they certainly do.

To begin with the food at BDT was good. They had a nice selection that would appeal to adults and kids alike. The salads were crisp and full of colorful greens. Mom got the chicken Cordon Bleu that she said was juicy and well prepared and Ada and I ordered the chicken tenders which she gave a 7/10 rating – another of her topics of expertise. Both entrees were served with creamy mashed potatoes and perfectly cooked fresh asparagus. The drink selection was varied and included fun mermaid/ocean themed cocktails. We also enjoyed desserts at intermission including Ariel’s ice-cream cake complete with edible pearls. Ada’s review of the desserts, which I believe to be overwhelmingly positive was, “I demolished it.”

I attended the Broadway production of The Little Mermaid during its relatively short run (685 performances and 50 previews) at the Lunt-Fontanne Theatre in 2008. The sets and the talent were spot on. The majority of the songs that were added for the show just seemed to add unnecessary bulk and the story changes I could have done without. I’m apparently a Little Mermaid purist.

My complaints then remain my complaints now. Despite tweaks to the story and a few song changes since then, the additions don’t add much to the overall show.

With that out of the way I will completely go over-board (pun completely intended) with my praise of how BDT has managed, with the combination of a fantastic and talented cast, stellar props, creative lighting, rigging and wires, and amazing costume design to convincingly portray a world under the waves, on top of the waves and on dry land. The characters also maneuver through the crowd during the show further immersing the audience in the experience.

Lillian Buonocore as Ariel and Cole LaFonte as Prince Eric were perfectly cast, their vocal quality brings a clear and appropriately innocent and youthful feel to their performances.

Other standouts for me were Alicia K. Meyers as the sea witch Ursula. Meyers nails the vocals and body language of the iconic villain and the vocal talent of Anthony P. McGlaun as Sebastian the crab really wowed me.

Despite my gripes about the new songs, two of the songs that should absolutely be a part of this world were Ursula’s “Daddy’s Little Angel” and “Positoovity” which was made wonderfully entertaining by an enthusiastic and endearing performance by Bob Hoppe as Scuttle the seagull. Of course, all of the original songs we know and love are a part of the show as well. “Under the Sea” brings out the majority of the cast as a myriad of sea creatures that brought a smile to the faces of everyone in the crowd.

An interesting twist to this production is the use of puppets created by puppet master Karl Hermanson. From crabs to seagulls it’s a creative twist that has some hits and misses. Ursula’s nefarious eel henchman Flotsam and Jetsam are the standouts in this category. The eel puppets, complete with glowing eyes, are quite large and are brought convincingly to life by Matthew D. Peters and Brian Jackson.

The sheer amount of work that went into producing this on the BDT stage is pretty mind-boggling. After the show, Ada, who sat with a huge grin on her face through the majority of the show said, “You want to see it so much your eyes start to hurt, you don’t want to blink there’s so much to see.” It far exceeded my expectations as far as how ambitious the scope of what they’ve been able to accomplish is concerned. Simply put, this is a great show and overall experience that can thoroughly be enjoyed by not only the young but the young at heart.