The reality of drugs in our schools 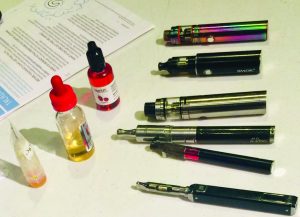 Photo by Autumn Leopold – Vape pens along with a variety of other drug paraphernalia that have been confiscated from local middle and high school students on display during a talk given by Student Resource Officers at Grace Place church on Tues. Feb. 12.

The presentation covered vaping (vape pens and Juul), marijuana, dabbing, spice, double cup or lean, and so much more. I wasn’t familiar with half of the terms I was introduced to. You see I have a 10-year-old in elementary school and this stuff hasn’t been on my radar yet. However, I learned most children start vaping when they are 13, which means we need to be discussing all of the terms, methods, and consequences of vaping and drug use with them well before they have the first opportunity to vape. Now that public officials in the U.S. have declared vaping an epidemic, 10 years old doesn’t seem so young to start having these conversations.

What is vaping? Vaping is the act of inhaling and exhaling the aerosol, often referred to as vapor, which is produced by heating a liquid which generates an aerosol, or “vapor,” that is inhaled by the user. The liquid in the e-cigarette, commonly called “juice,” is usually made of nicotine, propylene glycol, glycerine, and kid-friendly flavorings like bubble gum and cotton candy.

It is common to see social media photos and videos of teens vaping. Teens can even get sponsored by vape companies to make YouTube videos about vaping, which includes tricks, hacks and hiding places for vape pens in bedrooms, backpacks and clothing. Some clothing companies are now making clothing with special hiding spots for vape pens. You can find everything you need to know about vaping on YouTube. Even more disturbing, you can watch videos of people getting dangerously high on THC using hacked vapes.

“Stealth vaping” is hacking vapes to put THC in instead of nicotine. You can vape marijuana in its dried-leaf form or as THC-infused wax, also known as “honey.” Vaping THC omits none of the tell-tale skunk odor that smoking marijuana does. Therefore your teen could potentially be smoking in school, on the bus, or at home undetected. Not to mention, when kids vape rather than smoke marijuana, they are consuming a much higher concentration of THC. This can lead to high anxiety, paranoia, hallucinations and vomiting.

Although it is against federal law, vape companies continue marketing e-cigarette liquids in packages with colors, characters and names that look nearly identical to juice boxes, candy and cookies, in addition to highlighters, Sharpies, ink pens, pencils and iPods. However, they provide a disclaimer they are not marketing to children, when clearly they are. Last year the Food and Drug Administration (FDA) and the Centers for Disease Control and Prevention (CDC) published data from the 2018 National Youth Tobacco Survey (NYTS). The data showed from 2017 to 2018, there was a 78 percent increase in current e-cigarette use among high school students and a 48 percent increase among middle school students.

In Berthoud you have to be 18 years old to purchase a vape pen or Juul. Some teens have found a way around this by using the cash to buy Visa gift cards, then ordering online. Sometimes the teens will send their packages to one person’s home who is the distributor of the group. Other times one person may do all of the ordering and sell vape and paraphernalia.

Juul is a different e-cigarette that uses nicotine salts that exist in leaf-based tobacco for its key ingredient. You can also hack a Juul to put THC in it. As if nicotine and THC weren’t enough, you can also hide liquid meth inside Juul pods. In November of 2018 Juul stopped selling products with kid-friendly flavors in stores, but they are still readily available online. As of now, there is no long-term research on the harmful effects of nicotine salts. Without going into too much science, nicotine salts provide a smoother hit, a faster absorption rate, and higher nicotine strengths. You can get overwhelmed by too much nicotine, the nic salts are more expensive, and you need different devices for different strengths.

According to the American Lung Association, using e-cigarettes and vaping using the flavored “e-juice” can cause popcorn lung. Popcorn lung is a lung condition where the bronchioles (the lungs smallest airways) are damaged, creating lung tissue scarring and narrowing these airways. The chemical which causes popcorn lung is diacetyl, which was once commonly used to give food products, such as popcorn, a rich, buttery flavor and is now found in e-juice. Popcorn lung can mimic signs of asthma. It can cause wheezing that is not related to another health condition, such as bronchitis or asthma, dry cough, shortness of breath, or difficulty breathing deeply, especially with physical activity, unexplained exhaustion, rapid breathing, and persistent skin, eye, mouth, or nose irritation if caused by a chemical. While you can treat popcorn lung to manage symptoms, the lung tissue scarring caused by popcorn lung is irreversible. Also, there is no cure for the condition once it has developed and begun constricting the airways. It is critical to recognize the symptoms in your child or teen early.

A few other drugs Kingston and Mosley mentioned are honey oil or hash oil (which is very dangerous and can cause explosions if you were to try to home cook it), Spice –which is a synthetic marijuana cannabinoid, aka the zombie drug, and Adderal/Oxycontin or Oxycodone (check your medicine cabinets) which is being crushed and snorted.

One last noteworthy item is called double cup or lean. As freelance writer, Mac McCann, states “lean’ is a slang term for a recreational drug that’s typically made with prescription-strength cough syrup containing codeine and promethazine, mixed with soft drinks such as Sprite, Mountain Dew, or Big Red, and sometimes with Jolly Rancher hard candy. The concoction has a variety of nicknames, such as ‘syrup,’ ‘sizzurp,’ ‘barre,’ ‘purple drank’ (or simply ‘purp’), and ‘Texas Tea.” As it’s typically consumed in double Styrofoam cups, it’s often alluded to by discussing ‘Styrofoam cups’ or ‘double cups’ or simply ‘drank.”

This presentation was eye-opening and rather emotional for me, and I watched the videos and heard stories about our local youth. I know I have a lot more research to do and a lot of discussions with my child need to be had. If you’re not familiar with many of the drugs and methods I have mentioned, I encourage you to research them on your own or give one of the eight school resource officers in the Thompson School District a call. You can start by calling the school your child attends and ask for the SRO. If your child attends elementary school, call the middle school they will be attending and ask for the SRO. Kingston and Mosley said they and their fellow officers are more than willing to meet with you and go over the presentation, answer any questions you may have, cover legal and criminal consequences, and discuss how to talk with your children or teens about these issues. If you would like a copy of the presentation emailed to you, please email Deputy Kingston at [email protected]. I highly recommend inviting the deputies to go over this with you. We owe it to our kids to start the conversations.