Perhaps fans’ expectations were far too high, or perhaps the movies were just that poor, but George Lucas’ attempt to reboot the iconic “Star Wars” franchise in the early 2000s was for many a gigantic disappointment. Thankfully, Lucas was not immune to help, nor discouraged from ever exploring the subject again, eventually turning over the reins to friend J.J. Abrams, who in turn helped lead the triumphant comeback in 2015 that was “The Force Awakens.”

The space epic was indeed revived, creating a metaphorical bridge that connected the young, potential new generations of “Star Wars” lovers to the old and fanatical, many of whom grew up several decades ago worshiping Luke Skywalker, Han Solo and Princess Leia. 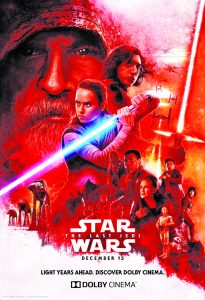 However, if “The Force Awakens” was the bridge that introduced many to the Star Wars icons of the past, then “The Last Jedi” is the fork in the road that eventually establishes a divide between the old and the new.

“The Force Awakens” was instrumental in providing long anticipated returns to the big screen for Harrison Ford, Carrie Fisher and Mark Hamill, though simply not doing it for the sake of a cameo, as what made the film so good was their incorporation into a new story that made sense.

And it still does in “The Last Jedi,” though relative unknown Rian Johnson – who directed and wrote the screenplay – makes it abundantly clear that “The Last Jedi” is more about Rey, Finn and Kylo Ren – in other words the new heroes and villains of the galaxy. Rey and Kylo Ren, in particular, take on a much more prominent role in the new epic that is full of surprise twists.

“The Last Jedi” picks up where “The Force Awakens” left off, as Rey (Daisy Ridley) has finally discovered the whereabouts of Luke Skywalker (Hamill) following his self-imposed exile. Skywalker is still reeling from a failure to train new Jedis in the proper ways of the Force, particularly Kylo Ren (Adam Driver) who neglected his powers for the Dark Side and is now spearheading the robust First Order.

While Skywalker is aging and growing more jaded about the fate of the galaxy, Rey is the contrary: optimistic and persistent. It is clear Rey and her friends cannot possibly tackle such an evil and powerful enemy without gaining the wisdom of the great Skywalker.

Adam Driver is once again solid despite facing the seemingly improbable odds of matching the evilness of the ultimate bad guy in Darth Vader, and the rest of the young cast members also hold their own. There is also one last appearance from Fisher, who had a chance to work on the project before her untimely death in 2016.

“Star Wars” has always been the classic tale of good vs. evil. Yet in “The Last Jedi” the filmmaker does a terrific job of not making it so black and white. The members who chose the Dark Side were not always destined for such an evil fate, and our heroes are not without faults. It is those shocking revelations of the past that take the latest “Star Wars” film in a bold new direction and creates a firm foundation for the conclusion of the new trilogy due in 2019.