The generosity of Sam Waldo 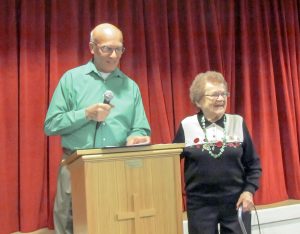 Berthoud United Methodist Church and Stu Boyd honor longtime community volunteer Sam Waldo pictured at the church’s annual St. Patrick’s Day dinner where Waldo was recognized for her many years of service in the Berthoud community.
Bob McDonnell / The Surveyor

It would be easier to list the Berthoud organizations and people who have not been touched by Sam Waldo. Enumerating who she has touched with her volunteer efforts is difficult because she has done so much.

Boyd highlighted the volunteer efforts of the soon-to-be 90-year-old Waldo. He mentioned her amazing 48-year run as a Sunday-school teacher for the church’s youth. Waldo only missed church four Sundays a year on average.

Waldo led the children’s church for about 30 years. Boyd pointed out Wald always paid for the materials the children used.

Away from the church, but related, Waldo provided a worship service for the residents of the Berthoud Living Center one Sunday a month for 10 years as well. The services were accompanied by a bluegrass gospel jam band whose music lifts the residents’ spirits. After their session, Waldo would often invite the band to her house for a meal.

Waldo also volunteers to deliver meals for Meals on Wheels (MOW) one day a week for close to 30 years.

Since the MOW kitchen facility is in Loveland, Waldo drives to Loveland, picks up her meals, delivers them in Berthoud, and returns the large insulated containers to Loveland.

A fall from her front step at home, followed by surgery, has slowed Waldo down a bit recently. But this is only temporary, she assures everyone.

The Berthoud Lions Club benefited from Waldo’s generosity too. She was an active member and, as a former bookkeeper, she volunteered to do the books for the club, according to Boyd.

Boyd also mentioned Waldo served as an election judge many times and was a member of the Thompson School District’s accountability committee for several years.

Many in the community remember Waldo and her friends, who comprised the Berthoud Kitchen Band. Playing pots, pans, bottles, kazoos, etc., this group brought smiles to many organizations in and around Berthoud.

“Sam was reluctant to talk about all that she did as a quiet disciple of Jesus Christ but talked easily and freely about what her various ministries meant to her,” Boyd said.

Others at the dinner had accolades for Waldo. Diane MacDonald, a friend and fellow church member, mentioned she and Waldo volunteered at AARP and the local historical society, and also attend the Barn Owl dances in town.

Besides all the volunteer work, Waldo mentioned her time working for a school district in Weld County. She worked in Johnstown as an administrator and in the superintendent’s office. Currently she serves on the Weld County school district’s credit union advisory board.

Betsy Haskins, a BUMC member and local volunteer, noted many at the dinner were community members, not church members, who came to honor Waldo.

“Sam is wonderful,” Haskins said. Haskins expanded on Waldo’s Sunday-school teaching career, saying in total it spans 65 years. Many current church members at BUMC had Waldo as a teacher, and now their children learn from her.

Linda Henderson’s experience is similar to Haskins’ as far as grandchildren. She says all five of her grandchildren enjoyed learning from Waldo. They range in age from 6 years to 19.

Anne Talley lives across the street from Waldo and has known her since 1969.

“She loves people,’ Talley said as to why Waldo does all that she does.

“She’s a good worker,” said Carl Rose, also from the Barn Owl group. “She knows everyone in town,” he said with a smile.

Lastly, Waldo’s son Mike, who attended the event to honor his mother, gave his thoughts on Waldo’s community involvement. Like her friends, he attributed her urge to help to her love of people and her love of kids.

After the event, when asked why she volunteers so much, Waldo laughed, then said, “Because they need me — and I need it. I’m not too good at staying home.”