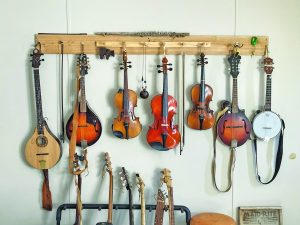 Couresy photo – Steve and Erica Frank of the Town Troubadours keep their instruments on pegs and stands in their Berthoud home. They like to play at the southeast corner of Mountain Avenue and Third Street.

On any given weekday, Berthoud residents might see Steve and Erica Frank singing and playing any of an assortment of string instruments at Mountain Avenue and Third Street. 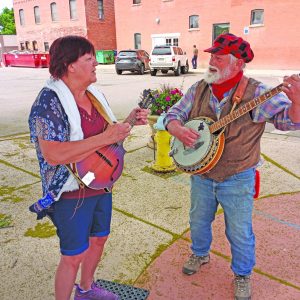 Courtesy photo – Steve and Erica Frank singing and playing music on the corner of Mountain Ave. and Third Street in Berthoud.

The Franks consider themselves to be troubadours, taking their instruments wherever they go whether it’s an appointment or the grocery store, local park or farmer’s market. But they also have their favorite playing spot at the southeast corner they call Troubadour Junction, where they’ve been playing for about a year.

“We get lots of waves and honks,” Steve said, adding that he and Erica don’t take any donations. “It’s strictly amateur. That way if we sound amateur, it won’t matter.”

The Franks, aka the Town Troubadours, play at Troubadour Junction two to three times a week, favoring noon on Wednesdays, though they might miss a time or two. They like the lunch hour in particular since more people are out.

“We smile. We talk to people when they come by,” Erica said. “Our music really changes depending on who’s in front of us.”

The duo plays for and hour and a half to two hours at a time, opting for all kinds of styles of music and types of songs.

“We play everything,” Steve said. “We play recognizable stuff you can sing along to.”

Other genres include country and western, ’50s rock ’n roll, blues, jazz and ragtime, plus music that’s good for a fiddle, such as Irish and Scottish jigs. They also like to throw in a few campfire songs and patriotic tunes.

“We play a lot of music that is historical,” Steve said. “We have music that comes from every part of American history.”

Steve is the lead singer, and Erica sings harmony. Steve plays anything with strings, including the guitar, banjo, mandolin, ukulele, fiddle, cello and standup bass, plus the harmonica and concertina, a mini-accordion. Erica, who majored in organ and piano in college, can’t bring her large instruments to the corner, so she plays a couple of instruments that are easier to transport, such as the mandolin and guitar (Steve taught her to play both). She’s the backup chords player, and Steve’s the lead.

“The music is just for fun. It’s to lighten up the mood of the town,” Steve said. “That’s what makes the whole thing worthwhile, giving somebody a happy spot in their day.”

Steve and Erica own about 30 instruments together, which they store in their home on pegs on the wall or standing upright. Steve teaches informal lessons and builds and rebuilds instruments, including three banjos he made from scratch.

The duo writes some of their tunes, and Steve writes a few solo. He wrote a song last winter called “Troubadour Junction,” the same name as their favorite corner. The melody is based on “Petticoat Junction,” the tune from a 1960s American sitcom about a small-town inn called Shady Rest Hotel, usually quiet except for the occasional train.

“We call this Troubadour Junction because the train comes through usually once while we’re playing,” Steve said.

The Franks became troubadours, or amateur musicians, in different ways. Steve grew up in a music-playing family, learning to play multiple stringed instruments after picking up the guitar at age 10—his father taught him a few chords, and he took it from there. He also ended up being the singer for his family troupe, learning the words to a “zillion different songs,” he said.

“I was never as good as any of them were,” Steve said. “I played the guitar and tried to keep up with them. I played backup rhythm guitar.”

Steve and Erica treat their playing as a hobby, liking that they can focus on it more now that they’re retired. Steve was an elementary school teacher for 30 years in places like New Mexico, Idaho and Arvada. Erica was a child advocate in Alaska for 20 years. They moved to the Loveland area after they married 16 years ago, relocating to Berthoud last year.

“We’re proud of being amateurs. We take our amateur (status) seriously,” Steve said.

Erica said, “If we’re off key, it doesn’t matter.”