The cold never bothered them anyway 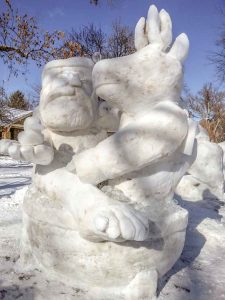 Inaugural event a great success for Berthoud Chamber and community

Despite sub-zero temperatures, hundreds showed up for the inaugural Berthoud Snowfest last weekend that was headlined by a snow-sculpture contest in Fickel Park. The contest gathered nine different teams from across the state, including artists from Breckenridge and Durango.

The objective was to create the most artistic sculpture over a span of four days, beginning on Wednesday, Dec. 14, and concluding on Saturday, Dec. 17. On Wednesday, snow was transported to Berthoud and stacked one layer at a time by volunteers until transforming into blocks that towered to 10 feet and weighed 11 tons.

Then the teams spent the next three-and-half days – sometimes remaining until after dark –carving through the massive blocks throughout a rollercoaster of temperature changes that reached as high as 50 degrees and with lows well below zero. Only hand tools were allowed, with most teams using a combination of shovels, hand scrapers, choppers and chisels.

In the end, it was veteran Team Merc, from Loveland, that took home first place in a tightly contested event, and will advance to the U.S. National Snow Sculpting Competition in January. Team Snice, from Durango and Breckenridge, took second place and hometown team Surfbilly finished third. Team Rabble Rouser won the People’s Choice Award as well as Honorable Mention from the judges. 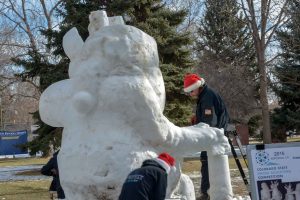 Team Merc – comprised of father and son Steve and Ben Mercia, as well as Alex Amys – are no strangers to snow sculpting, as Steve has 30 years of experience and Alex 16. Their sculpture of Santa Claus and Rudolph sitting side-by-side provided a remarkable re-creation of Father Christmas topped off with a glass nose for Rudolph.

Team captain Kerri Ertman said she picked Harley because she wanted a representative of Berthoud for the town’s first snow sculpting contest.

Perhaps the biggest surprise in the tightly-contested field of nine teams was Surfbilly took home third place. It wasn’t for a lack of talent but rather experience, as J.D. Markwardt (owner of the Berthoud tattoo parlor of the same name) and his father Rick had never competed in a snow-sculpting contest before. Their polar bear sculpture was a monster draw and also received a plethora of People’s Choice votes.

“I was very surprised. The first couple of days [sculpting] I didn’t even know if I had something I wanted to put my name on,” J.D. joked after being asked if he was taken off guard with placing third. “It was pretty rough physically and for taking three days off work, but it was worth it. It was a lot of fun. I hope to be back next year.”

While clearly artistic, Markwardt confirmed shifting from the realm of 2-D to 3-D art posed the biggest challenge. It was certainly a family affair for Markwardt as not only was his father involved but his 6-year-old daughter Bettie came up with the idea for the polar bear.

“My daughter is absolutely in love with polar bears. She even raises money for them. It was her idea to have a lemonade stand to raise money to help save polar bears,” Markwardt said. “It was just adorable to see it on her face [after we finished the sculpture].”

Deanne Mulvihill – executive director for the Berthoud Area Chamber of Commerce – described the first-time event as a “huge success,” especially considering people showed up regardless of the weather conditions.

“We have rugged Colorado, Berthoud people,” Mulvihill beamed. “We knew that Coloradoans are used to bundling up and putting on layers, and that’s exactly what they did.”

Mulvihill noted several spectators even returned after dark to enjoy the Parade of Lights and then reconvened at Fickel Park where an official lighting of the trees and Christmas carols took place.

“I don’t think there was a time when no one was [at Fickel],” she added. “There was always someone trickling through – all day long; even Friday evening when it was snowing, there were still people that came out.”

While the weather was not exactly comforting for visitors, the artists actually raved about the temperatures, as it was the primary reason the event left Loveland. The city sought to move the sculpting to a warmer month, making it that much more difficult for the artists.

“The warmer days we had this week are really good for removing a lot of snow at one time, so the weather played almost perfectly into how we want to do it,” Tommy Farmer of Snow Escape explained. “The first couple days were warmer in order to remove a lot of snow, and the last couple of days you’re doing more of the detailed work.”

“The sculptors were thrilled,” Mulvihill continued. “The biggest thing when we brought this event to Berthoud was they said, ‘We need cold weather. We can’t sculpt in warm weather.’ I would go by frequently to check on them and they kept saying we ‘Love this weather,’ ‘Love this weather.’ They’re excited for next year. It’s their new home.”

The sentiment was shared equally by the artists who did not hesitate to compliment the community on all its enthusiasm and support.

“Absolutely loved it,” Alex Amys of Team Merc remarked. “The love, the passion that is around here, it’s very welcoming. Everyone leant a hand. Even if they weren’t involved in the event they were coming by lending us lights, bringing us coffee, keeping us warm, bringing us food – you name it. It was excellent, the love is there.”

“The park is beautiful,” Ertman said. “I love the Christmas trees being all lit up. The town is awesome. Pete [Cowdin] from the clock shop was down here every day opening up his home to us, offering a warm hut.”

Mulvihill added other local businesses “welcomed the artists with open arms” and were instrumental in providing food, warm beverages and warm shelter, including D’s Boutique and even the homes located directly across from the sculptures.

“I’m the founder of the event, and we needed a home,” Steve Mercia summarized. “If this is our new home, this is great. The community was awesome.”

If you haven’t visited the snow sculptures yet, be sure to stop by Fickel Park, as the works of art will remain until the sun melts them away.