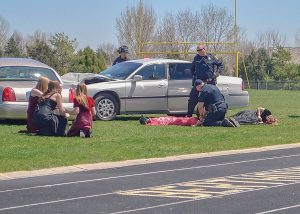 Berthoud students and fi rst responders act out a crash scene at Max Marr Field at Berthoud High School on Friday, April 22 in a mock drinking and
driving event aimed at teaching students the perils of drinking and driving.
May Soricelli / The Surveyor

Dramatic events unfolded before hundreds of Thompson School District high school seniors who gathered at the Berthoud High School football field last Friday. An elaborate mock crash scene was enacted by local emergency responders in hopes of exposing teenagers to the reality of drinking and driving. Dressed in prom clothing, several students acted out a scene of tragedy involving a car accident as a result of drunk driving, ultimately leading to mock fatality, arrest, and devastation.

The clincher of the event was the compelling story shared by Loveland High School student Jordin Martinez, who bravely shared his firsthand experience with tragedy due to drunk driving. Just two years ago, Jordin’s father, 37, and brothers, 1 and 6, were killed by a drunk driver while they were driving home from church one day. He detailed the startling events of the day he lost three irreplaceable loved ones. Martinez remembers walking into the hospital and seeing his step mom sobbing and asked where his father and brothers were. He’ll never forget her words: “The three of them met Jesus tonight.”

This brought pin-drop silence to the stands, and several students’ shock was clear on their faces.

The high school mock crash event was the vision of the Leadership Loveland Class who organized the affair. The Leadership Loveland class, through the Loveland Chamber of Commerce, is an eight-month training program that ends with a project that in some way gives back to the community. Justin Perdue led the group of 15-20 students who decided coordinating a prom season mock crash could have a lasting impact on the seniors of the TSD. “If it is well received, we hope someone carries the torch and puts this on again,” said Perdue.

The Leadership Loveland team was happy to see all levels of law enforcement take part in the enactment including: Loveland Police Department, Loveland Fire Rescue Authority, Berthoud Fire Protection District, Larimer County Sheriff’s Office, Thompson Valley Emergency Medical Services and Colorado State Patrol. “I think it’s a great program,” said Steve Charles, Berthoud Fire Protection district chief. Charles has been involved in hosting several other events similar to this one, and said in the past the students’ response has been emotional due to coinciding real events involving students in accidents.

On the middle of the BHS football field were two cars (donated by Stan’s Auto of Loveland) that were set up as if they had collided on the field. Once all students had found a seat in the bleachers, they heard, projected through the stadiums’ speakers, the sound of screeching brakes and cars crashing together. The scene then began to play out in which teen drivers of both cars stumbled out of the vehicles and several more actors fell or stumbled from the vehicles. One of the young women acted out calling 911 in hysterics. Real-life 911 operator Joe Humble responded to the fictional call over the speakers of the stadium. Police officers and paramedics arrived on scene, their vehicles entering the stadium with sirens and lights flashing. The driver of the “responsible vehicle” was tested for alcohol and immediately arrested. Meanwhile, one victim lay on the field unresponsive. The other actors who wore makeup to appear bloody and banged up were “interviewed” by officers. An ambulance proceeded to take the “injured” parties away. One of the girls was declared “deceased” and was carried into a hearse. (Allnutt Funeral Service donated the use of the hearse for dramatic effect).

After the dramatic crash scene, three speakers were present to give testimony to the tragic reality of the scene portrayed. The speakers were Loveland Police Department school resource officer, Andres Salazar, Jordin Martinez, and Medical Center of the Rockies ER physician Jamie Teumer.

Salazar spoke on the frequency of teen’s driving under the influence of alcohol.

“What kind of decision are you going to make? The decisions that you make can haunt you the rest of your life,” said Salazar.

The last speaker, Teumer, came on the field and shared her anecdote.

“When I was your age, every day I left the house my mom told me to drive safe,” said Teumer. “The things that make me the angriest in my profession are the things that happen that could have been prevented.” Teumer shared a tragic story of a drunk teen driver who is permanently paralyzed in an accident after recently receiving a football scholarship and now would never walk or speak again.

Salazar left the students with a poignant message.

“When you go to prom we can’t be with you; your parents aren’t with you. You have to be able to guide yourselves,” Salazar said.

Overall, Loveland Leadership was greatly impressed by the efforts of TSD and all other community members that pulled the many pieces together in this effort. Alcohol, Drugs, Awareness, Movement (ADAM) Club and Mothers Against Drunk Driving (MADD) volunteers handed out informational flyers to students at the event. Other contributing parties to the event were Home State Bank, Guaranty Bank, The Weedin Agency, The Group Real Estate, Lamp Rynearson & Assoc., Loveland Elks Drug Awareness, and Cheeks International.