Teachers Association ‘redundant,’ according to Langner

School board member Lori Hvizda Ward is comforted by friends after the special board meeting regarding the teachers’ contract was adjourned Wednesday.
John Gardner / The Surveyor

People booed as they walked out of the crowded overflow room at the Thompson Valley School District offices after the Board of Education rejected–in a 4-3 vote–the Memorandum of Understanding for the teachers’ contract for the upcoming school year Wednesday night.

In a discussion that the entire community could presumably expect what the outcome of the other six board members would be, many wanted to hear from board member Carl Langner–who’s also been absent from recent meetings.

But when asked at the meeting by Board President Bob Kerrigan if he had any comment on the discussion regarding the MOU, Langer simply said, “not at this time.”

Hundreds of people, mostly teachers but some parents and students, filled the boardroom to witness the discussion Wednesday night. Another crowd remained outside after the boardroom and overflow room capacities were met. People stood with their ears pressed to the windows, attempting to hear what was going on inside. Many of them were anxious to hear what Langner would say and how he would ultimately vote. 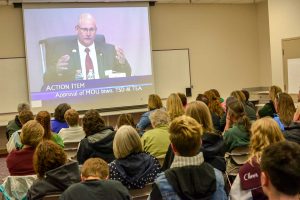 People watch school board president Bob Kerrigan in the overflow room of the Board of Education meeting Wednesday.
John Gardner / The Surveyor

The discussion that did happen was typical of the current board and what occurred inside was simple: the majority of the board, Langner, Donna Rice, Board Vice President Bryce Carlson, and Kerrigan, voted against approving the MOU.

Rice, Carlson, and Kerrigan each provided reasons for their votes against the MOU.

Kerrigan said that he wanted to see what other successful districts were doing in order to move the Thompson School District in a new direction.

Carlson listed a number of issues he didn’t approve of specifically in the MOU including: keeping the two-by-two oversight committee, unlimited use of facilities for the TEA, and of course the exclusion of a pay-for-performance system for teachers.

The pro-MOU faction of Lori Hvizda Ward, Pam Howard and Denise Montagu argued in favor of approving the MOU, and provided sometimes emotional testimony as to why it should have been approved. 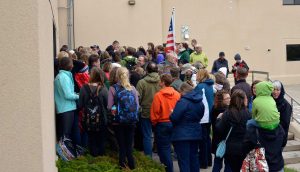 A crowd of people await the Thompson School District Board of Education’s decision regarding the approval of the teachers’ contract at Wednesday’s meeting.
John Gardner / The Surveyor

“And why wouldn’t they? When there are opportunities available elsewhere in a less hostile environment,” Montagu said.

“I believe it’s the board’s job to be pro-student,” Montagu added, “and to do that we have an obligation to be pro-teacher.”

Kerrigan responded to Montagu’s statement of teachers leaving the district by saying that “Maybe they’re not up to the challenge of the district.”

For Hvizda Ward, she said that it was important to approve the contract to clear up any uncertainty that is circulating.

“As the largest employer in the city of Loveland, I think we owe it to our employees as to what to expect next year,” Hvizda Ward said.

But Langner gave no comment; he simply voted against it. However, when contacted by the Surveyor Thursday night, Langner offered a bit of insight into his decision.

“It seems to me that our best way to improve things for the teachers is to have them report to the administration and get rid of the middle man,” Langner told the Surveyor. “We are working out how to do that and it looks like–to me–that the teacher’s association is redundant.”