The final chapter in the Tanner Flores trial happened within a 13 minute time-frame in courtroom 5B at the Larimer County Justice Center Thursday afternoon.  8th District Court Judge Greg Lammons sentenced Flores to life without parole for the June 2016 murder of Ashley Doolittle. 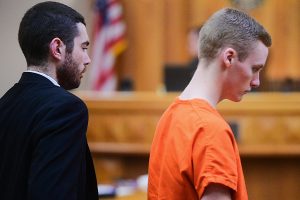 Photo by Austin Humphries pool photographer/The Coloradoan – Tanner Flores stands next to his attorney, Daniel Jasinski,  arrives in court for sentencing after being convicted of first-degree murder. Flores was sentenced to life in prison without the possibility for parole for the death of ex-girlfriend Ashley Doolittle in June 2016.

The 19-year-old was convicted of first degree murder, felony murder and second degree kidnapping of Doolittle, his ex-girlfriend. The jury deliberated for almost six hours between Tuesday and Wednesday afternoon following a 7 day long trial.

Ann Marie Doolittle, Ashley’s mother, gave a powerful statement on behalf of her family. She stood at the podium just a few feet away from Flores who was seated between his lawyers, in a bright orange jumpsuit with feet and hands in restraints, his parents seated directly behind him. “Tanner did more than murder Ashley, he destroyed two families,” she said. Family and friends of both teens attended the trial that several times left standing-room only in the courtroom.

Ms. Doolittle spoke about her daughters love for horses and the fact her family had just completed building a home where Ashley could have enjoyed her horses. “You took away our son’s best friend, we will never have the joy of seeing our daughter’s children or walk her down the aisle … we won’t get to tell her how proud we are of her,” Ms. Doolittle continued. Ashley’s brother Michael, a high school student, and her father Jeff watched silently from their seats as the statement was being read. 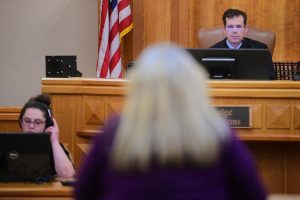 Photo by Austin Humphries pool photographer/The Coloradoan – Judge Gregory Lammons listens to a statement from Ann Marie Doolittle on behalf of her family during sentencing for Tanner Flores.

Ashley Doolittle graduated from Berthoud High School in May 2016 and had plans to attend Colorado State University. She was the Boulder County Fair and Rodeo Lady-in-Waiting at the time of her death and was crowned Queen posthumously in 2017.

Ms. Doolittle said Ashley always cared about other’s feeling and had told her she didn’t want to hurt Tanner but wanted to end the relationship. Ms. Doolittle said, “Our hearts go out to the Flores family … a part of me feels sorry for Tanner but that does not mean he should not be punished for his actions.” 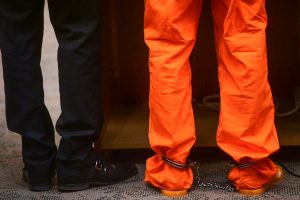 Photo by Austin Humphries pool photographer/The Coloradoan – Tanner Flores stands next to his attorney, Daniel Jasinski during his sentencing at the Larimer County Justice Center in Fort Collins.

She closed her statement by saying, “We want him to carry out the rest of his life in prison,” also saying they hoped this would be an example to other young men to show, “It is not okay to hurt your girlfriend if she no longer wants to be with them.”

Flores was asked if he wanted to make any statements, to which he declined.

Judge Lammons made very few remarks aside from saying, with the severity of the charges Flores was convicted of, he had very little discretion in the sentencing. He also stated that, “There is nothing I can say that Ms. Doolittle didn’t already say.” Flores has served 482 days already and will spend his remaining days in prison serving out his life sentence.

Flores was convicted of shooting Ashley Doolittle three times in the head while she was a passenger in his truck. The two had been in a tumultuous relationship that Doolittle had ended. Flores drove Doolittle’s body to a family owned property on the western slope where he was soon thereafter found by police and taken into custody.