By Amber McIver-Traywick
The Surveyor

The trial of Berthoud resident, Tanner Flores, 19, accused of shooting his ex-girlfriend and rodeo queen, Ashley Doolittle, 18, in June 2016 has come to a conclusion after a 6-day trial and nearly 6 hours of deliberation by the jury. Flores has been found guilty on all counts, including first-degree murder, felony murder and second-degree kidnapping charges and is now facing a life sentence without parole. 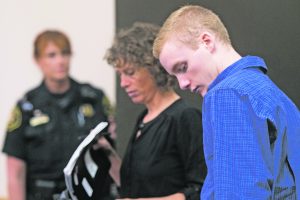 Photo by Austin Humphreys, pool photographer/The Coloradoan – Tanner Flores stands beside one of his attorneys, Janet Laughon, after being found guilty of first degree murder and second degree kidnapping at the Larimer County Justice Center on Wednesday, October 4, 2017.

The courtroom was again standing room only with more than a dozen people crowding the aisle as the jury filed into the courtroom to deliver their verdict. 8th District Court Judge Greg Lammon’s read aloud the verdict to a silent room. Doolittle’s family and friends wore purple in Ashley Doolittle’s honor as well as the pins many of them had worn throughout the trial depicting Ashley in her rodeo attire. After the first response of guilty was read several people began shedding quiet tears on both sides.

The defense throughout the trial attempted to prove that Flores’ did not plan the murder in advance but that the decision to shoot Doolittle was, “hasty, impulsive and an unplanned act,” and that Flores was, “a confused and heartbroken young man… completely consumed by emotion and confusion,” by the on-again-off-again nature of he and Doolittle’s relationship which resulted in him shooting her three times.

Had the jury decided this was the case, a second degree murder conviction could have resulted in sentencing ranging from 8-48 years with the chance of parole. This also would have meant that the jury found Flores innocent of kidnapping charges, further reducing the sentence by as much as 38 years.
The prosecution painted a vastly different picture of the teen throughout the trial by describing him as a controlling and jealous boyfriend who ultimately planned to kill Doolittle if she refused to be with him and then kill himself. The prosecution theorized that after shooting Doolittle and seeing her struggled to breath, and as Flores himself described it, “freak out,” he lost his nerve to turn the gun on himself. The prosecution also stated that this explained the haphazard plan to drive to his great-grandfathers property in Collbran, Colo. with Doolittle’s body still in the front seat of his truck as he hadn’t planned to be alive after the event himself. 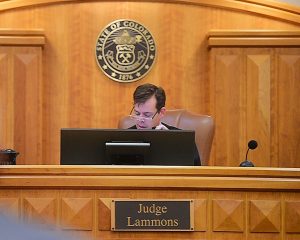 The District Attorney’s office said prior to the trial that they would not be seeking the death penalty in the case despite it being within the realm of possibility in the state of Colorado for a first-degree murder charge.

Sentencing will take place Thursday at 2 p.m. The sentencing was expedited as the trial had been scheduled to last through Thursday and the next available court date would not be until November.

Doolittle was awarded the title of 2017 Boulder County Rodeo Queen posthumously. She was active in 4-H and FFA and was planning to attend Colorado State University. Doolittle’s parents have set up a foundation in their daughter’s honor dedicated to preserving rural and western heritage as well as prevention and awareness of teen dating violence. For more information visit ashleydoolittlefoundation.org