Mark French
Tales of the Little Thompson
The Surveyor 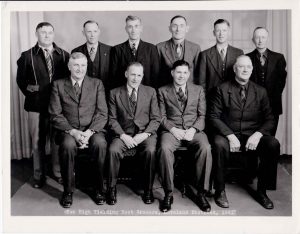 Growing sugar beets was serious business in Berthoud’s rural districts in 1941. The Great Western Sugar Company garnered farmers’ enthusiasm by honoring the beet growers who raised highest tonnages of the crop. The company also gave awards to young men in local 4-H chapters who belonged to special “sugar beet clubs.” The Longmont Junior Chamber of Commerce sponsored a world championship beet-shoveling contest that attracted competitors from around the world.

In October 1941, the opening of sugar beet harvest was the Berthoud Bulletin’s front-page news. In mid-October of that year the newspaper announced, “The harvesting of beets in the Berthoud District began on last Thursday. Work was delayed for a day or two on account of the recent rains, but is again in full swing. The yield and sugar content are reported to be about the same as last year.”

The Bulletin added that Mrs. Arthur Martin would be operating the scales at the Berthoud beet dump and added that A.T. Woods and John Bangert would be working as tare man and dump man respectively. The Berthoud beet dump was located near the intersection of the Colorado & Southern railroad tracks and Bunyan Avenue and served as a collection station for sugar beets grown near town.

The newspaper also reported that Mrs. Marion (Armona) Williams would weigh beets at the Buda dump east of Berthoud. Ted Finkbeiner of Loveland had been assigned to the Fife dump two miles south of town.

After the sugar-beet harvest was completed, the Bulletin announced that Emil Starck, Dave Peterson, John Schleiger, jr. and Emil Johnson of Berthoud had competed in the first annual world’s championship beet shoveling contest held in Longmont. Joe Fruhwirth of Fort Collins won the competition by 11 seconds to claim the first prize purse of $75. Starck of Berthoud placed second when he shoveled one and one-half tons of sugar beets in 5 minutes, 24.2 seconds. Second place earned him $40. The Bulletin reported that 50 contestants from 18 counties had entered the competition that was sponsored by the Longmont Junior Chamber of Commerce.

On Dec. 11, 1941, the Great Western Sugar Company held its Loveland District awards banquet at the Pulliam auditorium in Loveland. Since sugar beets grown north and east of Berthoud were processed at the plant in Loveland, Berthoud farms were considered part of the Loveland District.

At the event, Berthoud’s Robert Stotts of Berthoud’s 4-H sugar-beet club was honored for raising the best crop. The Berthoud newspaper noted, “Robert’s fields harvested 15.56 tons per acre, had a 90 per cent harvest stand, and produced 5,077 pounds of sugar per acre.”