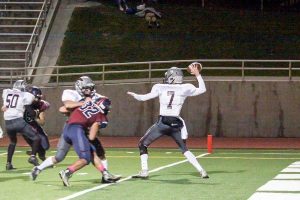 Berthoud quarterback Cody Braesch passes the ball during the Spartans’ victory over Northridge on Oct. 30.
Karen Fate / The Surveyor

Limiting mistakes, especially avoidable mistakes, is perhaps the ultimate key to success in sports. Making too many mistakes can quickly negate any advantage a team may have over their opponent.

In committing four turnovers in the first half – an interception, two fumbles lost and another on downs –the Berthoud High football team allowed Northern League foe Northridge to hang around in a game that most observers expected to be a one-sided affair in the Spartans’ favor. Berthoud was able to right their ship in the second half, however, scoring 20 unanswered points to win by a decisive 30-6 final score on Oct. 30 at District Six Stadium in Greeley.

“I thought we played pretty well in the first half but we just put the ball on the ground, we had too many turnovers,” said Berthoud senior safety and running back Chad Ellis. “We had four turnovers, but say we had three scoring drives on those, that’s 21 points off the board.”

Head Coach Troy Diffendaffer, asked after the game about Berthoud’s second-half turnaround said, “They got challenged in the locker room there to come out and play with a little more heart, a little more vigor and they did well. This wasn’t one we could let get away or we’d be done.”

Northridge’s strategy appeared to be to play a dime defense to attempt to contain the Spartans high-powered passing offense. The approach only had a modicum of success; Berthoud moved the ball up and down the field, but the turnovers prevented them from getting any points for their efforts. 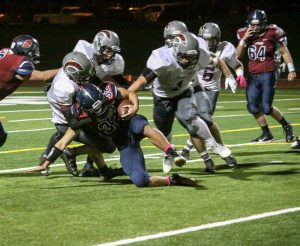 After driving into Northridge territory, Berthoud’s first drive of the game ended when Northridge linebacker Jake Hammer intercepted a pass over the middle from Spartans quarterback Cody Braesch. Berthoud responded quickly, however, on its next possession when junior tailback Karsten Bump ran for 79 yards down the right side to set up a one-yard touchdown run from Braesch to give Berthoud an early 7-0 lead.

Yet Berthoud’s next two drives each ended with a fumble lost. The first of which came deep in Berthoud territory to set up the Grizzlies’ only score of the night – a nine-yard pass from Chance Eben to Kaylor Werner. Ellis blocked the subsequent extra point attempt by Northridge kicker Kyla Beck, preserving a 7-6 advantage for Berthoud with 1:22 remaining in the first quarter.

Despite being put in less-than-ideal circumstances by the offensive mistakes, Berthoud’s defense did not allow the Grizzlies to get on the board again. While they did surrender some yards, Berthoud’s front seven put pressure on Eben, causing the sophomore quarterback to force throws into tight coverage, one of which was intercepted by Jackson Hall and set up Berthoud’s second touchdown of the night, a seven-yard run from Braesch that put Berthoud ahead 17-6 with 9:12 remaining in the third quarter.

“It’s that ability to know that they were going to bend but they weren’t going to break and know that nothing was going to get behind them so they were able to play a little more aggressively up front, and they did,” Diffendaffer said of his defense. “They were doing a great job with their hand placement, getting off blocks and controlling the line of scrimmage all night long.”

Berthoud extended its lead 24-6 when receiver Max Bump scored on a 51-yard catch-and-run. The senior wideout had to reach opposite his momentum to snare a dart from Braesch just in front of the sideline before turning up field and galloping downfield for the end zone. Hall scored his 11th touchdown of the season on a 25-yard play that put Spartans up 30-6 with 5:15 left in the game.

The Spartans big plays in the passing game were set up by their commitment to continue running the ball against the Northridge dime defense, despite some struggles with the ground game early on. When all was said and done, Berthoud rushed 34 times for 222 yards, both season highs, and did so despite the absence of standout senior offensive lineman Stephen Lockard, who will miss the remainder of the season with a leg injury.

“When you can run the ball on anybody it’s a pretty good feeling and it’s pretty deflating for the defense,” Ellis explained. “So pounding that rock in there was just wearing them down and then they have to eventually bring people back in and that’s when we get lapses in the secondary and that allowed us to have some big plays.”