The Berthoud High School (BHS) sports teams closed out the 2021-22 school year in style this spring. Multiple school records were broken, particularly with the BHS track & field team where the school brought home two more state championships. Below is a wrap-up of the spring sports season as well as our picks for the Players of the Year from each program. 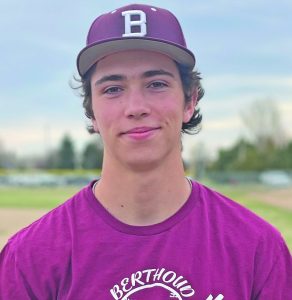 The BHS baseball team took the diamond this spring with the intent of making another trip to the postseason. After beginning the season with a respectable 5-3 record and a whopping +52 run differential, the Spartans fell victim to some injuries, a brutally tough conference schedule and just some old-fashioned bad luck. Berthoud lost 14-straight games, many of which they held leads late. The Spartans did close out the season on a positive note as they won a 15-0 mercy-rule shortened contest over Weld Central.

Berthoud history was made on the mound on March 30 when sophomore pitcher Connor Jorissen threw a perfect game – the first in the history of the school. Jorissen did not allow a single Sky View Academy batter to reach base in any way and recorded six strikeouts as the Spartans won 20-zip. Jorissen would follow up his perfect game in his next start by throwing a no-hitter as Berthoud walloped Thornton 21-1. It was not just two games where Jorissen shined; the sophomore ace finished the year with a terrific 2.97 ERA and 37 strikeouts in 37 and two-thirds innings on the bump.

While Jorissen, along with Jack McCrea (5.93 ERA, team-high 48 Ks) and Brandon Wageman, did their part on the mound, the Spartans raked from the plate. Junior Landon Kuntz was a monster, leading the Spartans in a whole host of offensive categories including batting average (.492), hits (32), double (10), triples (three) and tied Lawson Dawe for the team lead with 15 RBI; Dawe also led the team with seven stole bases and hit a fine .382 in his senior campaign.

Berthoud Manager Buddy Kouns commented at season’s end the team was “snake bitten” and took somewhat of a self-critical tone, citing decisions he made during some key moments he wished he had back. However, Kouns also was pleased with the effort put in by the entire squad, which had a record number of participants across all three levels this spring, and was adamant that the Spartans will expect to qualify for the 3A postseason next spring.

The BHS Lady Spartan golfers teed it up this spring with high expectations. And they exceeded them. 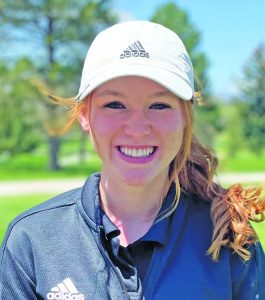 The team won the regional championship convincingly, posting a team score of 280, easily out-shooting runner-up Resurrection Christian (295) and third-place Holyoke (305) at Mariana Butte on May 23. Furthermore, Berthoud recorded a first – junior superstar Anya Knoll shot an 85 at regionals, holding off a back nine charge from Liberty Common’s Sydney Taylor to become the first BHS girls golfer to win the individual regional championship.

The Lady Spartan’s team regional crown was not just all Knoll’s doing, however, as the other three members of Berthoud’s varsity foursome finished in the top-seven in the 42-player field. After Knoll (85, first place) Berthoud was further boosted by Olivia Gravestock (97, fourth place), Brooklyn Tychsen (98, fifth place) and Ashley Russell (99, seventh place).

The performance at regionals was foreshadowed throughout the season. Knoll, Russell and Tychsen made remarkable strides from last year, where the former two earned state berths and Tychsen was short by just two strokes. All three improved by double-digits from their scores from a year ago; a testament to the ladies’ work ethic and dedication and to Head Coach David Hunn and Assistant Head Coach John Perry, who tailored their instruction to each players’ individual games and mental makeup. Gravestock, in a what was nothing short of a remarkable accomplishment, had never played a round of golf prior to this spring. The sophomore improved dramatically over the course of the year, displaying the game and mental toughness that so define golf.

Editor’s Note: The results from state were not available prior to press deadline for this week. Look for full coverage of the 3A state golf championship tournament in next week’s issue of the Surveyor. 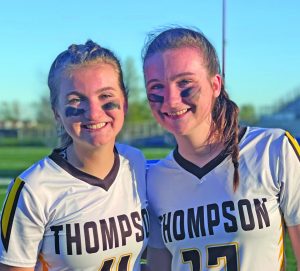 While the Thompson School District fields only one girls lacrosse team – played at and under the banner of Thompson Valley High School – the team draws its players from all district schools. Two of the team’s biggest stars, however, are Berthoud High sisters Aidan Carr and Rory Carr. This spring, the pair led the Thompson squad to 16-2 overall record and a runner-up finish in the 4A state championship match.

The Lady Eagles made mincemeat of their competition all season long. After dropped their opening match of the season, Thompson rattled off 16-straight wins, including three-straight victories in the playoffs over Roaring Fork (19-13), Aspen (18-9) and Castle View (11-9) to advance to the title game. In the state finals, after scoring three goals to open the game, Aidan suffered a knee injury and had to be removed from the game. Without the services of their, announced prior to the start of the title game, All-American junior, Thompson battled hard with Rory leading the way with four goals. Thompson turned in a stellar performance in the face of fierce competition from Green Mountain but came up short, losing 16-10 in a game that was back and forth until the final few minutes when the Lady Rams pulled away.

Despite being disappointed with the final result, the team has to be highly pleased with their efforts in turning in the best season in program history. Both Aidan and Rory will return to the field next spring where the team will aim to take the very top of the 4A mountain. 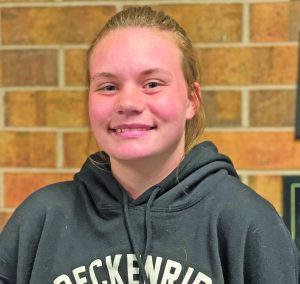 A last-minute resignation from the previous head coach resulted in the naming longtime Berthoud resident, parent and soccer aficionado Brent Grimditch as the head coach of the BHS girls soccer team.

Grimditch knew from the get-go that the team would face an uphill battle, but as credit to Coach Grimditch and his very young squad of Lady Spartans, the team can be proud of the fight they displayed throughout the year. Facing a conference schedule that featured teams from schools with much greater enrollment than Berthoud who are more-established soccer programs, the Lady Spartans finished the year with a 1-14 record that was in no way representative of the grit the team displayed from start to finish.

As the team – which was extraordinarily young with eight freshman and only four seniors on the varsity roster – grew and developed, taking their lumps along the way, much progress was shown. Perhaps no one the squad, however, made the strides of freshman Abi Speer. Speer took over as the team’s primary goalkeeper early in the season when senior and team captain Kaleigh Schanker went down for the year with an injury. Speer shined, recording an astonishing 314 saves in 806 minutes in goal. Speer’s stellar performance – the 314 saves ranked her third among all high school girls soccer players in the nation – made her an easy selection for All-Conference honors and figure to garner serious consideration for her placement on the prestigious All-State team.

After qualifying six of seven lines to the 3A state championship tournament a season ago, this spring the BHS girls tennis team took to the courts ready to prove last year was no fluke. Even with a younger team and some players moving to more challenging lines, the BHS squad, coached by Hanna Grow-Morales and Ted Fabiano, turned in a strong season. 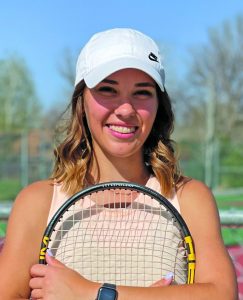 Junior Nicolette Marty continued to honor her family tradition of success on tennis court, handling the premier one singles line and facing off with some of the best competition in the state. While Marty finished the season with a 3-8 record and missed out on a state berth, she gained enormous experience and will be ready to make another run next season. Junior Holly Jaros in two singles compiled a stout 8-2 record but forwent competing in regionals in favor of academic obligations; Jaros would almost certainly have qualified for state. Three singles player Sydney Hocker, the lone BHS senior on the team, turned in a magnificent season. In her first season playing on a singles line, went 7-4 on the regular season, won in the playbacks at regionals and earned a spot at state to cap off her final season.

Berthoud’s one doubles line of Danae Alverson and Kendra Maitland turned in a great season, going 8-2 but suffered an upset defeat at regionals that prevented the pair from making a return to state. The two doubles line of Lyndsey Pancost and Kelsi Thoren earned their spot in state after a terrific showing at regionals. With a young squad who gained valuable experience and will lose only two seniors, BHS tennis will be a force with which to be reckoned next spring.

With each passing track meet this spring, school records were being broken and individual personal bests were being achieved. By the end of the season, Head Coach Blaine Voth’s track and field team brought two more state championships home to Berthoud High. 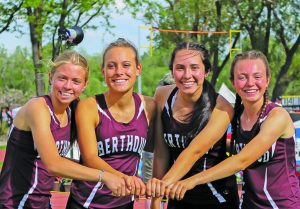 The BHS girls 4×800 meter relay team of Olivia Krueger, Josie Diffendaffer, Ally Padilla and Jaycee Williams repeated as state champs two weeks ago, cementing their induvial and collective legacies as all-time BHS greats. Freshman Jayden Nohr, who burst onto the scene last fall as a spectacular football player, also wrote an epic first chapter to his high school track career. At the state championships, Nohr broke the BHS record formerly held by Brock Voth in the triple jump, clearing 43’9.25 to place fifth. Nohr topped that feat on the final day at state, marking 22’9” in the long jump to win the gold medal and become the first BHS male athlete to win first in an individual event at state in 27 years.

Williams, seemingly on a weekly basis, kept breaking her own school record in both the 800 and the 1,600 meter runs while Krueger, who will compete in the Division One level next year at Kansas, did the same in the 3,200 meters. 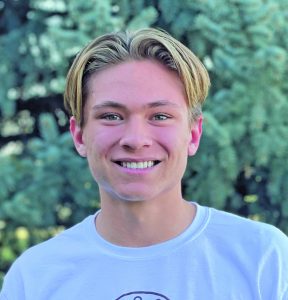 Freshman Scott Clark broke the BHS record in the boys 1,600 meter run as well, the school record was previously set a week prior by teammate Tate Bothun, who fell ill at state and was not 100% and ultimately finished in 17th place.

As a team, the Berthoud girls took third place at state and the team had medalists and point contributors across the board. Senior Anndee Davidson brought home three medals, earning podium in the long jump and both the 100- and 300-meter hurdles. Addy Kirkpatrick took a team-best fifth in the long jump with a season-best 16’5.”