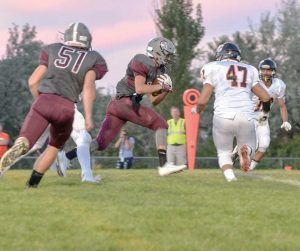 Berthoud running back Wyatt Woodrick (15) charges to the goal line during the first quarter of the Berthoud versus Greeley Central game at Max Marr Field at Berthoud High School on Sept. 3. Woodrick took the ball to the 1-yard line and
set up a Brock Voth touchdown, the Spartans’ first of the game.
John Gardner / The Surveyor

Two of the most enduring qualities of sports are sometimes the final score can be deceiving and a big play or two can have an inordinate effect on a game’s outcome.

The Berthoud High School (BHS) football team found itself on the wrong end of both of those in their Sept. 2 season opener. The Spartans fell by a 41-18 final score to the visiting Greeley Central Wildcats at Max Marr Field at BHS.

For three of the game’s four quarters Berthoud was more than just in it; the Spartans actually held a 12-7 lead midway through the second quarter. A pair of punt return touchdowns – one in the first quarter and another early in the third, both by electric Wildcat senior Jordan Cervantes – and three touchdowns in the final 12 minutes tipped the scales decisively in Central’s favor in what was an otherwise highly-competitive game.

“I’ve got to own up, those punt returns are mine,” Berthoud Head Coach Troy Diffendaffer said after the game. “Those are on me. We spent so much time making sure these young guys knew where to line up offensively, knew where to line up defensively, knew what the calls were and all that stuff, and the time got away from us and we didn’t get a chance to work much on special teams.”

The preponderance of youth on Berthoud’s roster – only three Spartans had played in a varsity game before Friday night – was clearly evident at times. BHS was flagged eight times for 46 yards, had some drops, missed assignments, committed four turnovers, and failed to convert on all three of their point-after touchdown attempts.

“These guys didn’t have butterflies in their stomach, they had elephants,” Diffendaffer said. “But they got their first one out of the way, their first contact, their first catch-and-hit and tackle and all that, so now we have to mature, if we don’t mature we’re going to die quick out here.”

Wide receiver and defensive back Wyatt Woodrick was the star of the game for BHS. The junior, who played virtually every snap in the 48-minute contest, finished the night with 213 all-purpose yards (88 rushing, 65 receiving and 60 returning) and scored the Spartan’s final touchdown of the night on a screen pass in the fourth quarter. Defensively, he led Berthoud with 18 total tackles, including four for loss.

Woodrick, who is now in his third season on Berthoud’s varsity roster, was asked after the game if he felt any added responsibility to help his young teammates in their first varsity action. “Me and Ben Douglas are the two returners, so we took on most of the responsibly to get everyone fired up and get everyone ready,” the junior said.

“We have a lot of sophomores playing and a lot of new juniors, and we haven’t played all as one team, but it’s the first game and I think we’ll come out next week and be better. We just have to focus on the small things,” Woodrick explained.

Despite making some mistakes, on a number of occasions the Spartans did flash some brilliance on both sides of the ball.

Trailing 7-0 in the first quarter, Berthoud’s defense prevented Central from adding to their lead with a goal-line stand. The Wildcats were held to minimal gains on two running plays from inside the Berthoud six-yard line before an incomplete pass set up fourth and goal at the one. Linebacker Levi Decker and lineman Jordan Doles stuffed Central’s Brett Yackey to force the turnover on downs.

After the goal-line stand, Berthoud assembled a 99-yard scoring drive, mixing runs and passes that involved Woodrick, Jake Yuska, Danny Pelphrey and Anthony Trojahn. Quarterback Brock Voth punctuated the drive with a touchdown on a draw up the middle for Berthoud’s first score of the season.

Berthoud found the end zone again on their next possession. On the first play from their own 26-yard line, Voth found Trojahn over the middle for a 74-yard catch-and-run that put the Spartans ahead 12-7 with 6:12 remaining on the second quarter clock.

“Pre-snap I saw that safety was shifted over to the left, and when we sent Danny [Pelphrey] in motion the backer went with Danny, so when I saw that I thought ‘okay, Trojahn is a probably going to be there’ and he was there,” Voth explained of the first touchdown pass of his varsity career.

Unfortunately for the Spartans it was last time they would cross the goal line until Woodrick’s score late in the fourth quarter. Central scored just before the end of the first half and Cervantes’ second punt-return TD came just over one minute into the third quarter. The Spartans defense forced three-and-outs on three-straight possessions, but Central eventually broke through, with Yackey scoring on a four-yard rush five seconds into the fourth quarter that was followed by a pick-six from Wildcat defensive back Xavier Bonham put the visitors up comfortably, 35-12.

Berthoud (0-1) will travel to Denver to take on Lutheran (W-L) next week for the first leg of their three-game, non-conference road trip.