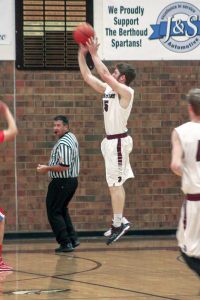 Berthoud’s Patrick Barron goes up for a jumper during the basketball season opener at Berthoud High
School on Dec. 1. The boys were victorious in the contest, defeating Weld Central 57-51.
Angie Purdy / The Surveyor

If you have a plan, you stick to it, even when the going gets tough, and things are going to work out for you in the end. That is precisely the message newly-minted Berthoud High School (BHS) boys basketball coach, Mike Burkett, has been preaching to his team.

And things working in their favor is precisely the result the Spartans got in the season opener on Dec. 1 at home. Berthoud battled back from a deficit that grew to seven points in the second half, to beat the visiting Weld Central Rebels 57-51.

Despite Berthoud’s best efforts defensively, the Rebels were able to drain six 3-pointers in the first half, including three in the final two-and-half minutes, to take a 34-31 lead into halftime. While Weld Central hit trey after trey, the Spartans had multiple misses on lay-ups and close-range shots.

“We told them at halftime, these guys hit six threes in the first half, they’re not going to keep shooting like that … what’s going to win this is if you guard and if you rebound,” Burkett said after the game. “We didn’t make any type of adjustments … we just said we’re going to keep guarding people; we’re going to get rebounds.”

The Spartans responded to their coach’s message in the second half. A steal and break-away dunk from sophomore McCallan Castles in the middle of the third period, a slam that brought the Berthoud bench and hometown crowd to their feet, provided the exclamation point.

“I just read the steal and I didn’t think I was going to make it all the way there, but it went in so it was good,” Castles said of his momentum-shifting dunk.

“We’ve stressed possession by possession and putting pressure on the other team on both ends of the floor and in the end things are going to work your way,” Burkett said he told the team. He was proven correct when, to begin the fourth period, the Rebels missed 10 straight field-goal attempts just as Berthoud began grabbing rebounds and sinking shots.

“We’re down, we didn’t panic, we’re just going to fight our way through it and that’s exactly what they did,” said Burkett. “The team just fought through today.”

While Patrick Barron and Noah Purdy, who each scored a team-high 10 points on the night, were draining clutch fourth-quarter three-pointers, Castles and Jamie Gray were pulling down boards on Weld Central’s continued missed shots.

Castles finished the night with 13 rebounds and Gray, who was singled out for praise by Burkett, had nine.

Burkett added that he made a mistake having Gray on the bench late in the first half when the Rebels assembled a 13-6 scoring run, but the senior kept his head in the game and came through in crunch-time when the team needed him most.

Berthoud plays their next three games in Longmont at the Skyline Falcon Challenge taking place from Dec. 2 to Dec. 5. The Spartans will return home where they will co-host the annual Spartan Classic with three games on Dec. 9, 11 and 12.