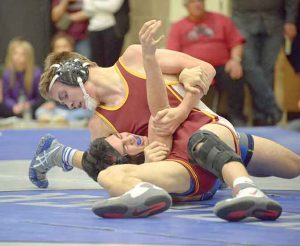 Even in lean years, the Berthoud High School wrestling team finds a way to defy the odds and turn in strong performances. Despite a prevalence of youth on the roster and not having wrestlers in four weight classes, Berthoud still managed to take fourth place in regionals and is sending six grapplers to the upcoming state tournament.

Wrestling in the Region 2 finals last Saturday at Eaton High School, Berthoud earned 133 points, behind Valley (222.5), Eaton (200) and Brush (143) in the 12-team tournament, while Dalton Williams, L.T. Torres, Miguel Sarmiento, Austyn Binkly, Matt Bailey and Wyatt Larson all earned trips to state. Binkly, Johnson and Bailey all qualified last season, but this year marks the first trip to state for freshmen Williams and Torres, as well as sophomore Sarmiento.

For Berthoud’s long-tenured and highly-decorated head coach, Scott Pickert, who will retire after the state tournament, it is business as usual.

“It hasn’t changed at all; we have the same three days to prepare and go down there,” Pickert said. “We will go do what we always do and hopefully have a good weekend.”

Pickert acknowledged his squad’s relative youth and inexperience, saying, “We have a younger crew this year, we just continue the process and watch the kids continue to grow and progress in their craft,”

He pointed out the involvement under the bright lights of the Pepsi Center will serve as an invaluable learning experience for the younger players.

However, the state tourney won’t be a new experience for Bailey, as he will make his fourth appearance. The senior took second place in the 138-pound class at regionals, coming up short in the title bout to Hunter Branson of Holy Family in a 14-5 major decision. Bailey cruised through the first two rounds at regionals, winning via fall in 3:04 then winning a 12-2 major decision to advance to position to defend his regional title.

While Bailey said it’s nice making his fourth trip to state, he said he feels like there’s still room to improve.

“I need to wrestle smarter, and I’ll just take that to state and help it push me. I need to be smart about how I attack and not give up silly points,” Bailey said.

The senior enters state with a solid 30-9 record on the season.

Binkly, who boasts a 40-9 record on the year, will also make a return to state, where he took sixth place as a freshman last season. Binkly advanced quickly in his first two rounds at regionals, winning with falls in 1:59 and 2:40 before facing Garrett Miller of Bennett, who had beaten Binkly earlier in the year. While Miller won the pair’s semifinal bout by a razor-thin 6-5 decision, the loss not only motivated Binkly but provided the sophomore with what he believes will be an advantage in a potential state semi-final rematch.

“Every time I’ve wrestled him it’s gotten closer and closer, but I think I figured out what I need to do to stop what he does,” Binkly said. “I finally figured out what was working, but I figured it out too late in the match … that’s good to know for next week.”

“If I’m in the semifinals, I won’t lose again. I’ll do whatever I have to do,” he said.

Larson, who also qualified for state last year, appears to be peaking at the right time of the season. Having battled back from an early-season ankle injury, the junior took fourth place at regionals in the 170-pound class with a 4-1 decision in a do-or-die bout over Brian Paxton of Weld Central. Williams took third place by winning a 3-2 decision over D.J. Matthews of Valley in 106s while fellow-freshman Torres (113) took fourth place by beating Bennett’s Byron Mayo 8-2. Miguel Sarmiento (120) won fourth and punched his ticket to state via rule over Ilijha Gutierrez of University.

The latter three will all be making their first trips to state, and Bailey said he will work to impart to his teammates some of what he has learned in his prior three trips.

“The thing I’ve learned is just not to stress about it too much,” Bailey said. “Not to think about it too much. What you see all the time these great wrestlers get to state and they wrestle (poorly) because they start freaking out.”

Pickert highlighted the importance of getting his wrestlers mentally prepared for the state championships, explaining drastic changes in technique and approach cannot be accomplished in three days of practice.

“I think the mental aspect is huge; make sure they have the right confidence,” Pickert said.

“At state, all the best wrestlers from everywhere come together, and you get to see great wrestling and everyone is at their best,” Bailey said.

The state wrestling tournament will be held the Pepsi Center in Denver Feb. 16-18.