It’s one of the highest-profile sporting events, at any level of competition, of the entire year. The annual state wrestling tournament at Denver’s Pepsi Center brings grapplers from all over the state together for the three-day championship event. 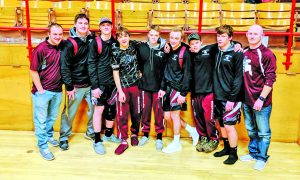 “Certainly satisfied, when you can send seven guys downtown, that’s really saying something about your team,” Berthoud Head Coach Will Carron said. While he has been with the BHS wrestling program for more than a decade, this weekend will mark Carron’s first trip to state as the Spartan’s head coach.

Five of the seven Spartan wrestlers who qualified for state did so by competing in the regional championship match, with Binkly and Strait entering as regional champions. Williams, Larson and Johnson go in as regional runners-up and both Balliet and Torres took third place. The performance of all seven at regionals pleased Carron, who said, “The other great thing is, we didn’t have a single guy take fourth (at regionals), so they don’t have to face a regional champion in the first round at state. Placing higher gives us better seeds for state, so that was great to see.”

Strait, who is only a freshman, advanced through the regional bracket with a pair of pins, the first in 2:51 over Moises Rivias of Sterling and the second in 4:47 over Eaton’s Armondo Munoz, then accepted a forfeit in the semifinals before dominating top-seeded Kolton Robertson of Weld Central in a 15-0 technical fall victory in the championship bout.

Binkly will make his third trip to state as he joined Strait as a regional champion. Entering regionals as the top-seeded wrestler in the 138 division, Binkly pinned Jay Rothe of University High in just 1:01, won a 15-2 major decision over Weld Central’s Rieley Roskop before winning a razor-thin 1-0 decision in the championship match over senior Eaton senior Aerial Rodriquez.

Carron explained that seeing Strait and Binkly win regional champions came as no surprise. “Expectations for those two are always the same, I know those kids have set some high goals for themselves and I truly believe they are going to achieve those goals. They are going to wrestle the way they know how, tough and aggressive.” Carron said both want to bring home state titles, and their performances at regionals and throughout the season have both well-positioned to make a run at the state championship.

Two of Berthoud’s heavier wrestlers have battled back from injuries and enter state having overcome some tough obstacles. Larson, a senior, has dealt with knee and ankle injuries throughout the season and, at regionals, won a pair of decisions to take second place in 170s.

Carron praised Larson’s toughness and the example he set for his teammates in overcoming his injuries, saying, “Wyatt … has battled through it all, he has come up to the room every day, he’s never complained about his injury, he’s taken it all in stride. He took down the number-two kid in the state in the semifinals with a hurt knee. I was really proud of him to see that.”

Johnson returned mid-season from a torn ACL injury he suffered more than a year ago, and Carron believes the senior is primed to turn in a strong showing at state. Johnson entered regionals with a 15-2 record and pinned Eleazer Chavez in 5:20 in the quarterfinals, then won a 4-0 decision over Joseph Cockroft in the semis.

“Brock continues to get better every single week. We knew he was going to be rusty. He hasn’t stepped on the mat for a year and a half. Anyone would be rusty at that point,” Carron said. “But the nice thing about Brock is he continues to get better. Brock is improving every single weekend, and we will see that again this weekend. I have big plans for Brock downtown, and I think it is really going to show for him.”

The state wrestling tournament will be held at Pepsi Center in Denver Feb. 15-17.