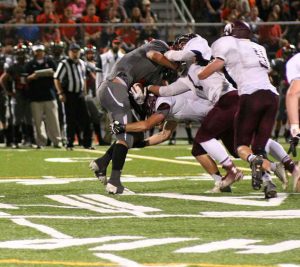 On a hot Friday night where the air temperature topped out at 90 degrees during warm-ups, the synthetic turf at Erie High School was surely hovering around 100 degrees. The reading on the thermometer wasn’t the only reason the temperature was turned up in an important midseason game for Berthoud. The Spartans headed into this game against the Tigers 4-0, looking to improve upon their undefeated record in the biggest game of the year thus far.

Berthoud has never won at Erie since the two schools have been in the same 3A classification. The Spartans football program hasn’t had a 5-0 start in eight years, dating back to 2006. However, even with the exhilaration of such a big game the players seemed a little flat in pre-game warm-ups.

The No. 8 state-ranked Spartans passed the test with a 17-7 victory and took another step toward returning to glory.

Erie lined up a defense that hasn’t given up more than one offensive touchdown in four straight games in 2014. Defensively, they are ranked sixth in the state.

Berthoud’s passing game, along with its No. 1 state-leading defense, has been its ticket to success, but Friday night the running game exploded at Erie, led by Jimmy Fate. The Berthoud junior had a breakout performance with 131 yards rushing offensively, and 14 tackles (6 solo, 8 assists) defensively, to lead his team in both categories.

Friday night was capped off by celebration. Saturday morning the Spartans were back to team activity for physical recovery and game recap to start preparing for the state’s No. 4-ranked Holy Family Tigers this Friday.

Heading into tomorrow’s night game against another group of Tigers has upped the ante to see how good these Spartans really are.

Holy Family’s Chris Helbig is the No. 2 quarterback in the state in 3A classification with 1,450 yards, 15 touchdowns and only two interceptions. Helbig will target his No. 1 receiver Bryce Buderus, who averages over 26 yards a catch and has five touchdowns on the season. They also have one of the top preseason players to watch in running back Ryan Younggreen, who leads the team in rushing, averaging nearly 130 yards a game.

A key for Berthoud will be containing Helbig. He leads a Holy Family offense that is the No. 1 team in the state in scoring, averaging 51.2 points a game. Helbig is a versatile athlete (played wide receiver last year) and moves extremely well under pressure, always keeping his eyes up field looking for an open receiver.

Pressuring Helbig falls upon Berthoud’s defense and its defensive line in particular. The D-line, composed of senior Micol Woodiel at nose guard, defensive ends, junior Steele Castles and sophomore Ben Douglas, will need to not only get to Helbig but wrap him up and not allow him to find open receivers down field. How the defense uses their linebackers and defensive backs to apply pressure will also be a key to stopping the Holy Family offense.

Berthoud is No. 1 in the state in all classifications in points allowed. The Spartans have only given up 13 points in five games.

The two scores this season came on one touchdown drive that ended with five seconds on the clock against Niwot, and the other against Erie last week. The Erie score was preceded by a long kickoff return to the Berthoud 45, followed by a penalty that gave Erie an extremely short field that resulted in seven points. Lock down the special teams lane integrity, and don’t give short field advantages to their opponent, and the Spartans can continue to be very difficult to score against.

Offensively, Berthoud brings its own weapons to the table in a team that has scored 196 points of its own with a few games on a running clock. A running clock happens when a team is so far ahead officials don’t stop the clock to end it quickly.

The Spartans have the No. 4-ranked 3A quarterback in Cody Braesch. The Spartans junior QB has 1,073 yards in the air to go along with 11 touchdowns and four interceptions. Braesch spreads the ball around to five receivers with over 125 yards this season, led by junior Jackson Hall. The Spartans leading receiver, Hall, has 353 yards, six touchdowns and averages 22.1 yards a catch. Included in the 125-yard-plus club is junior Chad Ellis with 229 yards, Ben Poirier (161), senior Matt Bonds (142), and Fate (128).

Holy Family will be the biggest test-to-date for the stingy Spartans defense. This game will go a long way in positioning each team with a more favorable opportunity to claim a league championship and post-season play.

Four very tough games lay ahead for Berthoud after Holy Family, but this is a game that football fans across the state circle as a key match-up between two top-10 teams.

Kickoff is at 7 p.m. at Max Marr Field. We’ll know a lot more about this group of young men that call themselves Spartans a few hours later.