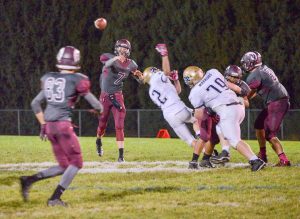 Berthoud quarterback, Cody Braesh, 7, passes for another completion to wide receiver Jackson Hall during the game against Frederick on Oct. 17 at Max Marr Field. Braesh and Hall connected for both Berthoud touchdowns in the game.
John Gardner / The Surveyor

Coming off a hard-fought, come-from-behind win in Mead the week prior, and perhaps looking ahead to what figures to be two very tough games – against Northridge and Roosevelt – to conclude the regular season, the Berthoud High football team first had to play a 0-7 Frederick squad that had been out-scored 240-41.

It had all the makings of a trap game.

Yet the Spartans did not get trapped. They, admittedly, did not play their best game of the season but did just enough to notch another victory as they topped the visiting Warriors 14-0 on Oct. 17 at Max Marr Field.

“We talked about it all week long, that’s all it was; was a trap game for us. We had to play clean football, we had to play disciplined football, and we didn’t, we were flat, we couldn’t get any emotion going,” explained Berthoud head coach, Troy Diffendaffer. “The good thing is we control our own destiny now and a W is a W. I have not seen a column in any paper or in any standings for an ugly win, just for wins.”

Berthoud knew what to expect from Frederick coming into the game. The Warriors are not a team that tries to dazzle their opponents with a fancy offensive attack, opting instead for an old-school, ground-and-pound approach centered around its running game. And the Spartans were ready for it.

Frederick attempted only 11 passes on the night, but ran the ball 38 times. It was hardly a model of efficiency as the Spartans held the Warriors to only 84 yards on the ground, a paltry average of just 2.2 yards per rushing attempt. It was a defensive performance of which Diffendaffer was very proud.

“The kids did a great job executing the scheme,” Diffendaffer said. “When you can stop their running attack with three down lineman it means good things for us.” 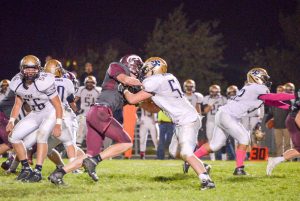 Berthoud defensive end Steele Castles disrupts Frederick’s offensive line as the defense stops the Warriors on Oct. 17. The Spartans won the contest 14-0, in large part due to its defense.
John Gardner / The Surveyor

While Berthoud’s front three controlled the gaps and prevented the Warriors from getting anything going on the ground, their secondary was equally impressive on the rare occasions the visitors put the ball in the air. The Spartans surrendered only 67 passing yards, allowing Frederick quarterback Brady Schaa to complete just five of 11 passing attempts.

“Our main thing is one-eleventh, everyone does their job and we’ll shut them down,” said Berthoud cornerback Matt Bonds. “We know our defense is solid and we rely on that, it’s something we can always fall back on.”

While Berthoud’s defense prevented Frederick from generating any sort of offensive momentum, the offense scored only seven points through the first nearly 45 minutes of play, allowing the Warriors to hang around in a game that was not expected to be so close.

On their first possession of the second quarter, Berthoud assembled an 11-play, 61-yard drive that was capped off by on a one-yard touchdown pass from Cody Braesch to Jackson Hall to break scoreless tie and give the Spartans a 7-0 lead; a slim lead they would hold for nearly all of the game.

Braesch would find Hall again late in the fourth quarter on a third-and-12 from the Frederick 21. It was Hall’s ninth touchdown on the season, the third-best mark in the 3A Northern Conference. The junior wideout has enjoyed a breakout season and credits a portion of his success to the offensive scheme employed by new Berthoud offensive coordinator, Mike Drake. 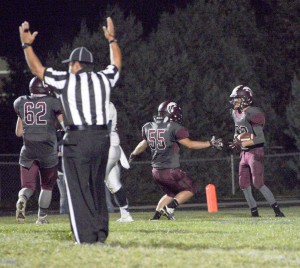 Wide receiver Jackson Hall is congratulated by Lucas Czarnecki after scoring his second touchdown of the game against Frederick on Oct. 17.
John Gardner / The Surveyor

“Coach (Drake) has opened up my whole span of football knowledge and it’s really helped me this year, Hall said.

“I’ve learned I may not get the ball, but if I’m not getting the ball I’m opening the lane for another receiver, and doing so will open the lane for me when he comes across. It’s really a great offense and it’s working very well for us so far.”

Hall finished the game with eight receptions for 80 yards, both team highs, to go with his pair of scores.

The win improves Berthoud to 7-1 on the season as they prepare for their final two regular-season games. It has been a resurgent year for a Berthoud squad that has struggled in recent seasons. The success the team has earned in 2014 is something that means a great deal to the team’s more seasoned players.

“This is the best experience of my life,” said Bonds, one of only eight seniors on Berthoud’s roster. “Playing with these boys is the best thing to happen to me and I never want it to end.”

Berthoud (7-1, 4-1) will host the Northridge Grizzlies (5-3, 4-1) tomorrow night on what will be the Spartans final home game of the regular season.