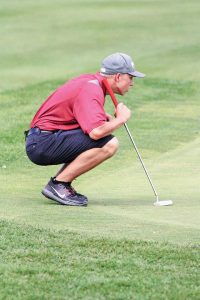 Berthoud’s Jack Hummel lines up a putt during Tuesday’s round at Ute Creek golf course in Longmont. Angie Purdy / The Surveyor

As strange as it might sound, the better one gets at the game of golf, the more difficult the sport becomes.

With some modest work, players can shave their 18-hole scores from the 100s to the 90s; others from the 90s into the 80s. But once one reaches the point where they can consistently shoot in the low-80s, shaving those final 10 or so strokes to approach “scratch” status becomes extraordinarily difficult.

Two current members of the Berthoud High School boys golf team – sophomore Cameron Poll and junior Jack Hummel – find themselves in that frustrating patch of development as golfers. Both have broken 80 multiple times this season in Tri-Valley Conference meets, but also believe they have left some strokes on the course that could have made a good score a great score.

Competing on Sept. 6 at Ute Creek in Longmont, the Spartans had three golfers, Hummel, Poll, and senior Josh Schumacher, card scores of 79 as BHS took third place with a score of 237, just nine strokes shy of first-place Sterling.

“We had three guys in the 70s again, we’re right there, we’re right where we want to be, so overall I’m really very pleased with the day,” Berthoud Head Coach Mike Burkett said.

To the player, the Spartans believe it will only take some small improvements in their short-game – shots within 100 yards of the pin – to shave the strokes necessary to compete for a regional championship and a spot in the two-day, 36-hole state tournament.

It is something Burkett has stressed since the beginning of the season, knowing he has a group of golfers who play well off the tee and have solid ball-striking ability. “We’re going to go to Cat Tail [Creek Golf Course in Loveland] every day to work on our game form inside 150 yards,” Burkett said. “Getting off the tee is not a problem for our guys, it’s what we do later.”

Hummel, whose 79 at Ute Creek marked his third sub-80 round of the season, touched on the same point, remarking he has seen significant improvements in his scores as a result of time put in honing his approach shots. “It’s definitely been my short game, I’ve worked so hard on it and I’ve really seen the improvement.”

The 79s Berthoud’s top-three shot on Tuesday were good enough for the trio to tie for eighth place in the meet. Hummel called his round “pretty rough” – a testament to the junior’s high expectations for himself.

“It definitely could have been lower; I had a lot of missed putts for par that turned into bogey, small stuff like that,” said Hummel.

Hummel added that the greens at Ute Creek were “changing every hole,” thus making it very difficult to accurately judge the speeds.

Each player stressed the importance of putting. Poll, who said it was “100 percent” his goal to qualify for state this year, commented that he works on putting every day because “that’s where you can definitely get your score lower.”

Sophomore Caleb Schumacher, who shot 87 at Ute Creek, and senior Brogan Sontag (90) are battling with one another to be the fourth player on Berthoud’s varsity foursome for the postseason.

“We have three really good golfers, and we’re both fighting to be that fourth guy for regionals,” Schumacher said, adding he too will devote the lion’s share of his practice time over the next week-plus on putting.

“Cameron has come a long way, that’s back-to-back rounds in the 70s for him … he just continues to grind stuff out,” Burkett said. “It’s him and Jack, those two, Josh [Schumacher] is going to be Josh, we know what we’re going to get from him, but it’s those two who have done so much for us this year, I’m impressed.”

Berthoud will play their final regular season match on Sept. 12 at Broadlands Golf Course in Broomfield. After that, the Spartans compete in the regional tournament at the Boomerang Links in Greeley, where they will attempt to punch their tickets to state.