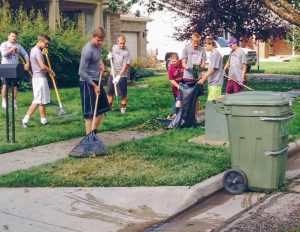 Members of the Berthoud High School football team cleanup a neighborhood after the July 14 hailstorm left debris scattered all over the streets and sidewalks.
John Hall / The Surveyor

In the aftermath of the July 14 hailstorm, the Berthoud High School football team saw a need and took action. The Berthoud football players and coaches, armed with rakes, brooms and garbage bags, helped clean up the mountains of leaves, branches and other objects left behind after the storm.

Head football coach, Troy Diffendaffer, was pleased that so many players from his team participated in the clean-up efforts. Diffendaffer has stressed to his team how important it is for the football program to be leaders in the community, because the community has always been so supportive to the team.

“The town of Berthoud has given me, the players and the team so much support over the years, it was an opportunity to give back to them,” Diffendaffer said. “[The community] helps in our fundraising efforts and fills our stands on Friday nights; without their support, running a successful program would be difficult.

“We are one town, one team,” Diffendaffer said.

Marcy Braesch took the lead as a parent to help coordinate the players’ efforts. Braesch’s family owns a local roofing and restoration company and saw first-hand how much damage the storm left in its wake throughout Berthoud and immediately organized the players to help the community.

“After driving around our Berthoud neighborhoods after the hailstorm, we realized that our community needed help cleaning up,” said Braesch. “It was quite impressive how many football players were willing to give their time to help the community.”

Diffendaffer and the Berthoud football program recently formed a players’ leadership council to act as a voice for the players and to help lead the team from a student’s standpoint. Braesch’s son Cody Braesch, the team’s quarterback and a member of the leadership council, helped direct players in their volunteer efforts.

“Being a part of the Berthoud football team means more than just being able play a game,” Cody said. “When you make a commitment to this team, you become part of a family, and the football family is a large part of our community. It was a great opportunity to show that we care, and I was glad we were able to give back to the community after all they do for us.”

Over 20 members of the Spartans football program participated in the cleanup effort after the storm. If the character of these young men has any impact on the upcoming season, then the community has a lot to look forward to in 2014, both on and off the field.