Berthoud ranked No. 7 in CHSAA Class 3A 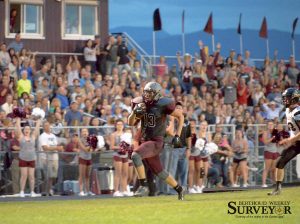 Berthoud tight end Mccallan Castles runs unopposed for a 55-yard touchdown in the first quarter of the Spartans’ season opener at Max Marr Field at Berthoud High School on Sept. 4. Castles, a sophomore, ended the night with three receptions for 85 yards and a touchdown.
John Gardner / The Surveyor

At the end of the day, winning is what it’s all about in the world of sports.

And winning is exactly what the Berthoud High School football team did in its season-opener on Sept. 4 at Max Marr Field at BHS. The Spartans shut-out the visiting Valley Vikings by a 29-0 final score. While the end result was exactly what Berthoud wanted, it was clear after the game that the Spartans players and coaches left a lot on the field and it could have, and should have, been a much bigger win.

“We played a team we should have beat, and we did. We didn’t do it clean, we had way too many penalties, we shot ourselves in the foot too many times,” Berthoud Head Coach Troy Diffendaffer said after the game. “Offensively we just didn’t execute in the second half at all and that’s disappointing.”

“Even though we did happen to win this game, if we get into later games and play like this we’re not going to win,” Hall said.

The Spartans began the game very strongly, finding the end zone on their first three possessions to take a commanding 21-0 lead before even 10 minutes of football had been played.

Senior quarterback Cody Braesch opted to use his legs rather than his right arm to score Berthoud’s first points of the season as he ran for 14 yards around and past Vikings defenders to find the goal line; a key downfield block from tight end Mccallan Castles gave Braesch enough daylight to reach the end zone.

Their second drive was perhaps the Spartans best of the night as they had to march nearly the length of the field, 93 yards, converting two third downs and a fourth-and-one along the way. Braesch found sophomore receiver Wyatt Woodrick for a 33-yard catch-and-run that put Berthoud up 14-0, after a successful two-point conversion run from tailback Jimmy Fate at the 3:32 mark in the first quarter. 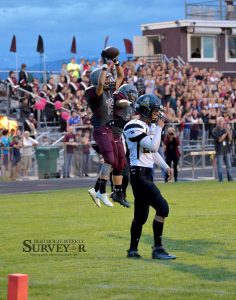 Berthoud’s defense forced a second Valley three-and-out in as many possessions and a personal foul penalty by the Vikings on the ensuing punt set Berthoud up near midfield. The Spartans wasted no time getting back in the end zone when Braesch connected with the 6-foot-5-inch Castles for a 55-yard score to give Berthoud a 21-0 lead with 2:08 left in the first quarter.

After the red-hot start, Berthoud’s offense, which debuted its no-huddle, hurry-up attack at times throughout the game, began to cool down. A lost fumble and a pair of dropped passes prematurely ended back-to-back second-quarter drives. Diffendaffer pointed to his team’s conditioning as the culprit.

“We’re not in very good shape. We had a bunch of our kids that didn’t make it in the weight room all summer long and it’s starting to show right now,” Diffendaffer said. “We started to wear out a little bit.”

The Spartans did right the ship on their last possession of the half, however, when Braesch connected with Hall for an 11-yard touchdown, but those were the last points the Spartans scored on the night.

Of their five possessions in the second half, three ended in turnovers, one on a punt, and the final one when the game clock hit triple-zero. Another ended before it began on a muffed punt. Berthoud’s passing game appeared out of sync at times and an injury to Fate took the Spartan’s number-one tailback off the field in the third quarter.

“Some of the plays we made and some of the mistakes we made were just unacceptable,” Hall explained. “We want to go deep and we want to play well and to do that we’re going to have to be more consistent.”

Berthoud’s defense, however, did a stellar job containing the one-dimensional Valley offense. Running back Juan Gomez, listed at 200 pounds and with a low center of gravity, was Valley’s workhorse. The senior carried the rock 30 times on the night but was held to just 93 yards, a three-yards-per-carry average and zero scores.

“I just have to give it to the inside guys,” Hall said. “[Gomez] is just a pile of bricks that can run though a lot of kids, but they played very well. I’m proud of what they did inside.” 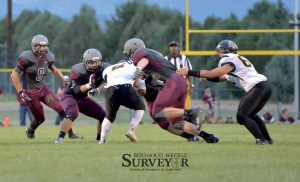 Berthoud’s defense held Valley to just 170 yards of total offense, allowed only six complete passes (on 19 attempts) with drive-ending stops being made by Fate, Brendon Stanley, Steele Castles and Chad Ellis. The Vikings missed a pair of field goal attempts on the night as well.

“It’s always big when you can shut the other team out, and our guys did a great job,” Diffendaffer said. “[Gomez} is a hoss and the guys did a good job rallying up and making tackles there; we bent but didn’t break.”