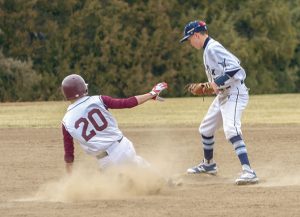 Berthoud’s Wyatt Stratmeyer slides into second base during the third inning bombardment
by the Spartans’ bats, Tuesday at Jack Sommers Field. The Spartans won their first game of the season in a 15-0 victory over Vista Peak.
John Gardner / The Surveyor

The first win is often the hardest one to get.

The Berthoud High School (BHS) baseball team played their first three games of the season with bats that were as cold as ice and, as a result, failed to notch a mark in the win column in any of the three. Yet Berthoud broke out of their early-season offensive slump in a big way Tuesday afternoon at Jack Sommers Field at BHS. Seven Spartans combined for 11 hits on the afternoon and pushed 15 runs across the plate to get the mercy-rule shortened 15-0 win over visiting Vista Peak.

The Spartans were aided by the six fielding errors committed by Vista Peak but played flawlessly in the field themselves while getting a stellar one-hit shutout performance on the mound from ace pitcher Josh Archer.

“I told the kids, don’t be defined by the first few games of the year; the season is still very young,” Berthoud Manager Buddy Kouns said after the game. “I told them yesterday that hitting is contagious and lack thereof is contagious, and so today we built some confidence, but now we’ve got to keep rolling.”

The confidence boost the win figures to give Berthoud was also a point Archer touched on, saying, “I think today was huge for confidence … we really focused earlier this week and at the end of last week, and I think it has started to carry over and we should be a lot better from here on out.”

The senior allowed just two Bison to reach base, a hit batsman in the third inning and a ground single off the bat of Vista Peak shortstop Casey Embury in the fourth inning that found a gap on the right side of the Berthoud infield. Archer also contributed a pair of hits and an RBI that pushed the Spartan’s lead to 10-0 in the bottom of the third frame.

“I just came in kind of re-focused, my arm didn’t feel super great in my last start but it felt a lot better today. I felt my velocity was a lot better and I really focused on commanding the fastball,” Archer explained. “Today it worked pretty well, I have a really good defense so you throw the fastball and if they hit it I know our defense is going to make the play.” Archer was relieved on the hill by Quinn Oliver in the fifth inning and the junior threw a perfect frame, striking out a pair of Vista Peak batters to preserve the shutout for Berthoud.

The Spartans offensive explosion began right away and never cooled off. Colin DeVore got the first of his three hits on the afternoon in Berthoud’s first at bat of the game and came around to score when C.J Balliet hit into a bases-loaded double-play. The two outs did not adversely affect the Spartans as they scored three more times in the frame to a 4-0 lead. Berthoud scored four more in the second and then six in the third before adding one in the fourth.

“We tried to change our mental approach, what we tried to do today was to go back to basics and break the game into smaller games, so our approach today was to try to win every pitch,” Kouns said. “In a quality at bat you win every pitch, I don’t think we chased as much today and I think we hit more of those hitters pitches today than what we have been.”

Berthoud (1-3, 0-2 conf.) will have a two-game series with Tri-Valley Conference rival Mead (5-1, 2-0 conf.) beginning on March 23 when the Mavericks pay a visit to Jack Sommers Field and concluding Saturday with Berthoud traveling to Mead.