Spartan Tree stands proud at BHS, in honor of Spartans past, present, and future 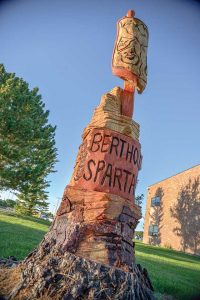 A blue spruce on the Berthoud High School campus that recently died was sculpted
into this piece, including a Spartans shield and sword, by Loveland artist Faye Braaten.
The sculpture stands on the west side of the building and is a monument to Spartans
past, present and future.
Surveyor photo

Thirty-five years ago an ecology teacher assigned his students a unique project. A brand new high school was being built on Spartan Avenue; with a bigger gym, impressive auditorium, much-needed classroom space, and one glaringly-bare school yard.

The teacher, Harry Buckler, saw an opportunity to apply his class lessons to a real-world community need. He instructed his students to design a plan for the new school property incorporating deciduous native trees in a fashion that would provide shade to the non-air-conditioned classrooms.

The following year the new high school opened for business, boasting a border of healthy young trees planted by Buckler and his father.

This year, Berthoud High School (BHS) Principal Chris Garcia was saddened to find one of the largest trees, a blue spruce, had died over the summer. District administrators considered chopping the tree down, as it presented a fire hazard, but Garcia had another plan in mind, one that would preserve the significance of the tree.

He hired “Chainsaw Mama” Faye Braaten, of Loveland, to come out and carve the old tree trunk into a Spartans sword and shield. The shield would feature the original school emblem: a mountain range with a foot to represent sports and a mask to represent the arts. Berthoud Spartans would be emblazoned across the bottom.

Troy Diffendaffer, physical education teacher and football coach at BHS, was hired to perform lawn maintenance at the school over the summer. “Mr. Garcia bounced his idea for the tree off me when I was outside working one day,” said Diffendaffer. “I thought it was a great plan.”

For Diffendaffer the tree wasn’t just a shade provider. The BHS teacher was one of the students in Buckler’s class who helped come up with the plan for the trees all those years ago.

“It holds a personal note for me,” said Diffendaffer. “I was part of the design process, I’m a lifer here. I graduated from Berthoud High and now I teach here.”

Diffendaffer’s not the only one with a connection to the blue spruce. Deisha Agho teaches science at BHS. She’s following in the footsteps of her father, the same Harry Buckler who planted the trees more than three decades ago.

Agho was surprised to discover the tree in the process of being carved when she joined the other staff members for their first planning day of the year. Garcia brought the staff outside to watch Braaten carve the tree over the course of planning week.

“Now every time I look outside I get to see a little piece of my father,” said Agho.

“Especially after the tough year we all had last year, I wanted to show the community that we’re thinking about those students that we lost,” said Garcia. I want people to know that we are all connected, former Spartans, lost Spartans, and future Spartans.”

Garcia said he saw the tree as a respectful way to add something to the campus grounds; something he hopes will bring the community together and be treated with respect.

“I brought the freshman class together at the beginning of the year to explain the significance of the tree,” said Garcia. “I told them about why it’s important to respect and take care of it.”

According to Garcia, the feedback from the community has been positive. The BHS staff decided to take their staff picture in front of the tree this year, and he’s already received calls from parents of former students, including one parent who lost her son last year, thanking Garcia for saving the tree to honor their students.

“The tree’s very artistically done,” said Diffendaffer. “It holds a lot of significance for us. I feel like it’s a piece of me out there.”

Although Buckler has not yet made it out to see the newly-carved tree, Agho said her father thought the idea was a great one. “He remembers planting the blue spruce,” she said. “He used to go around and hand-water every one of those trees back when he first planted them, before there was a sprinkler system installed.”

“We all had a hard year last year,” said Agho. “This was about doing something symbolic with a piece of history.”

The blue spruce stands near the west entry to BHS. It is dedicated to Spartans past, present, and future.