Sky is the limit for Berthoud softball

Some seasons the stars all appear to align perfectly.

As they begin the opening days of preseason practice, the Berthoud High School (BHS) softball team appears poised to have a special season. The turnover rate that is endemic to prep sports can at times set up a team for success. 2022 is that season for the Lady Spartans.

The team boasts a roster that has veteran, battle-tested players at the key positions, speed throughout the lineup, a batting order that can hit for both power and average, more depth, and depth with talent and experience, than a sizable chunk of their opponents and one of top pitchers in the entire state.

“It will not be a successful season if the girls do not finish in the top two in our league, we should be right there, and we should be in Aurora and anything less than that I know I will be disappointed and I know the girls will be disappointed, that’s where our mentality is right now,” said Berthoud Head Coach Buddy Kouns. “I’m super, super excited about this year. Cem(ryn Pickett) is one of the top five pitchers in the state. Last year we didn’t hit enough, we created sometimes, but not nearly enough, this year that will change, we’re going to hit deeper this year.” 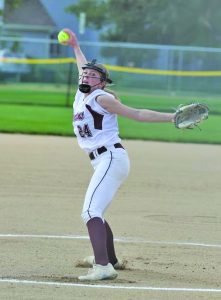 Photo by ACP Media – Berthoud’s Cemryn Pickett pitching in a game at BHS last season. Pickett, now a junior, is one of the top pitchers in the state and expected to handle the lion’s share of the work inside the circle for the Lady Spartans this spring

Kouns enthusiasm is not unfounded and it is shared by the leaders of his squad. “I think it’s to take state, win state, that’s what we’re all talking about and what we’re all thinking,” said Pickett, who enters her junior campaign as both an elite pitcher and feared hitter. Teammate Gracie Flores, who earned All-Conference and All-State accolades in her junior campaign last fall, echoed Pickett’s sentiments saying, “We are a force to be reckoned with, we’ve gotten a lot better, we really feel like this is our year.”

This season, Berthoud will be competing in a new league, the 3A Patriot League, which is not nearly as deep as the 4A Longs Peak League in which the team played in the recent past. A challenge for the team, however, is that while they will play in a league made up predominantly of 3A schools, the Lady Spartans will have to compete in the 4A postseason due to enrollment figures and fact the school did not petition CHSAA to play down. Rather than be the largest school in the 3A classification, Berthoud will once again be one of the smallest in 4A and, come October, will face off with schools with double and close to triple their enrollment.

“We can still throw punches at the 4A level with this group,” Kouns said and referring to the 2018 team that reached the 4A state final four, “We’re not that far removed from playing in the semifinals and this team might be deeper than that team was.”

Pickett, who plays year-round on elite club teams, has been working on enhancing her pitch repertoire, adding new spins, increasing her velocity (she has hit 70 mph on the radar gun, equivalent to 95 mph in baseball) and mastering the art of keeping hitters off balance.

“This summer season, the club season, I worked with every pitch, I’ve gotten better with all of them,” Berthoud’s junior ace explained. “The velocity came first and we’ve really been working in spins, I worked a lot with the rise ball, I worked on changeup … I’ve gotten good at getting the different spins and speeds down so it’s not just velocity because after a while people can start hitting velocity by timing it up, when you have different speeds, it really makes them think more.”

A change this season will see Flores move out from behind the plate, where she Pickett proved an elite battery last season, and return to the demanding shortstop position, where she has demonstrated elite range, arm strength and instincts. The change will require Pickett to work with a new catcher, but the move is one that both players, as well as Kouns, believe will make the team better in the end.

“I think it will make us stronger in the end, having Gracie at short, and someone strong behind the plate. Gracie and I had such a good connection, but I think this will be good for us,” Pickett said. Right now, Kouns explained, the early favorite to handle the catcher role is freshman Lexie Griffin, with whom Pickett has already worked in practice where Griffin has impressed.

In addition to shoring up the middle of the Berthoud defense, Flores’ move to full time shortstop will help keep her legs fresh and allow for even more offensive production. In 2021, Flores slashed .481/.565/.649 with a 1.214 OPS and had only two strikeouts in over 100 plate appearances while also stealing a team high 30 bases.

“I’ve been doing a lot of tee work and soft toss, I think repetition is key, feeling comfortable, and when I step in the box, I know I’m ready,” Flores said.

In addition to Pickett and Flores, the team will see the return of Lauren Zavednak at first base and Isabelle Guzman at second. Sophomore Shaylee Spears is poised for a breakout season Kouns said while seniors Molly Davison and Mason Premer will look to build on strong junior campaigns.

Berthoud will begin their 2022 season with back to back road games at Standley Lake on Aug. 18 and at archrival Roosevelt in Johnstown on Aug. 19. The Lady Spartans will welcome Loveland to Bein Field for their home opener on Aug. 23.