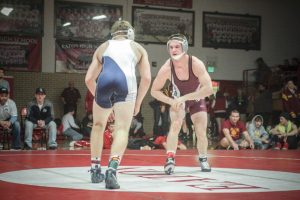 Berthoud’s Chad Ellis wrestles against University High School’s Justin Anderson during the 170-pound match at the 3A Regional Wrestling Tournament in
Eaton, Feb. 13-14 at Eaton High School. Ellis won the match by fall at 2:58 in the first period to win regionals and punch his ticket to the state tournament.
Karen Fate / The Surveyor

Jimmy Fate was a little nervous going into the 3A regional wrestling tournament in Eaton, Friday. But being nervous is normal, according to the Berthoud High School junior.

“If you’re not nervous before a match, there’s something wrong with you,” Fate said.

However, the defending state champion wrestler ended the day, the tournament, and his season, undefeated; qualifying with ease for the one tournament his sights have been set all season long — the high school state wrestling tournament. “Only four more matches to go,” he said.

Fate’s season began with a goal: repeat as a state champion. That goal quickly turned to expectation from classmates, coaches, teammates, the community, and most importantly, Fate himself.

Only four matches to go and he’ll have his answer.

Thirteen Spartans wresters competed in the 3A Region 1 Wrestling Tournament in Eaton Feb. 13-14. Six, including Fate, placed in the top four of their weight classes, moving on to the state tournament Feb. 19-21 at Pepsi Center in Denver.

Overall the Spartans finished in third place in the team standings behind first-place Platte Valley and runner-up, Brush. 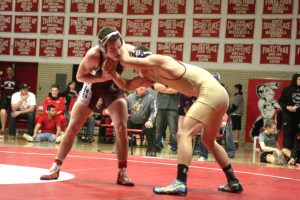 Fate and Chad Ellis brought home blue ribbons; Ellis pinned his way through the tournament, winning the 170-pound weight class and his third regional championship in as many attempts.

“You always want to do well at regionals,” Ellis said. “I did well; we did well as a team too compared to the last few years.”

Now, Ellis once again has his eyes set on a state title after a solid but disappointing third-place finish last year. Last year’s loss in the semifinals to Pueblo County’s Keenan Willits still stings a little for Ellis.

“I ended up getting caught on my back,” he said. “That was rough.”

Ellis went on to pin Glenwood Springs’ Justin Barham for a third-place finish. But this year he’s hoping for a different outcome.

“I’m in a completely different roll now,” he said.

In the past Ellis was an underdog wrestling his way through the pack, but this year, as the Spartans dropped to from 4A to 3A and Ellis has another year of experience, sporting a 38-3 record, which is also the best at the 170-pound weight class, he’s the one everyone will be gunning for.

“You have to prepare differently, but my confidence level is higher than the past couple of years,” he said. “That all just happens as you get more experience.”

Berthoud sophomore Matthew Bailey is also making his second trip to the big show after a third-place finish at regionals at the 120-pound weight class. He finished the season with a 35-11 record.

Joining Bailey is his brother, Kyler Bailey, (39-8) who had a great regional tournament and finished in second place, losing a close championship match to 3A top-ranked Conrad Cole of Brush. 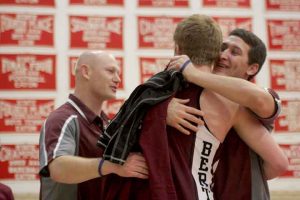 Berthoud junior Devin Vise wrestled well at regionals, finishing in third place and finishing his season at 28-19. In one of the most exciting matches of regionals, 152-pound Vise put on one of the most inspiring performances, coming from behind to beat higher-seeded Faith Christian’s Trevor Olsen in overtime. Vise, who is also making his first trip to the state tournament is excited.

“It feels great to be going to state,” Vise said. “I’ve been working hard and feel that I can make it far.”

And Berthoud freshman Colin Leypoldt, who wrestled to a fourth-place finish at regionals, earned a trip to state in his first high school season. Leypoldt, who has Fahr’s Disease, finished the year 20-13 is also excited for this opportunity.

“It feels awesome going to state,” Leypoldt said. “It’s been my dream, now my goal is to place and I believe I have a good chance to do that.”

For seven others the season ended sooner than they had hoped.

Ivan Warehime placed fifth, and Ben Poirier and Connor Balliet finished in sixth place. Poirier lost a heartbreaking overtime match preventing him from qualifying for state. And senior Matt Bonds, recovering from a concussion received in the Feb. 5 match against Thompson Valley, fell short of placing and lost a close match in the last 20 seconds to Brush’s Jerron Petterson, ending his high school wresting career.

Nonetheless, six Spartans will represent Berthoud well among 896 of the toughest high school athletes in the state. Wrestling starts at 3 p.m. Feb. 19, at the Pepsi Center in Denver.

The sextet is led by Fate, who at regionals won the 145-pound class, defeating second-ranked Holy Family wrestler Joseph Prieto for the third time this season and kept his perfect record intact, ending the regular season 42-0.

“Up to this point, my goals have pretty well been accomplished,” Fate said; “Just one more goal in mind to wrap up the season.”