The owner of Sirenhouse Salon ran out of room to offer men’s haircuts, plus wanted to give men their own barbershop.

All three of Jaye’s businesses are on Mountain Avenue, with Sirenhouse Salon and Siren + Grace Nail Salon next to each other and Six Barbershop a half-block west at 428 Mountain Avenue. The three locations servicemen, women and children.

Jaye named the barbershop Six since it is the sixth business she’s owned, including Studio Boom Salon in Longmont.

“Men want a place to go just for men that’s a salon,” Jaye said, adding that some of her male clients prefer something that feels “new and trendy” over a traditional barbershop. “Barbering and barbershops are kind of trendy right now, opening up all over.”

Jaye decorated Six Barbershop with a masculine feel, incorporating metal and leather with a set of longhorns and a deer skull as decorations.

“The interior is all black, and the décor is a cross between industrial and western,” Jaye said.

Six Barbershop has three chairs with room for four and is starting out with two barbers, Josh Kalman and Trish Biggio, a former Forever Faded barber.

Jaye originally opened Sirenhouse Salon + Barber in April 2019, followed by Siren + Grace Nail Salon in July 2020. Jaye, who has been in the beauty and personal care industry for 22 years, was a nail technician for six years in the late 1990s and early 2000s before she decided to go into business on her own 18 years ago. 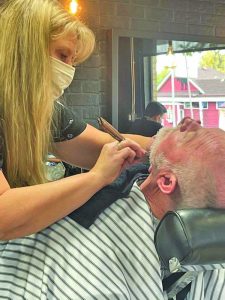 Courtesy photo – Trish Biggio, a barber at Six Barbershop, provides a beard trim for a client at the new downtown Berthoud barbershop.

“I love this little town, and I always wanted to do something in this community,” Jaye said about originally opening Sirenhouse Salon to accommodate the town’s growth and the potential it could sustain another salon. “It was a good time, we felt, and it was, because it took off like crazy.”

At her barbershop, Jaye caters to two types of clients, those who like walk-in services and those who prefer scheduling appointments in advance. She offers an online booking and payment system and provides buzzers to give notification when chairs are ready.

“We’re trying to really cater to just different types of people that live in this town now,” Jaye said.

Jaye entered the beauty care industry because she loves working with creatives and artists, she said.

“Anyone who does this for a living is doing it because it’s super creative,” Jaye said. “Hair styling and barbering used to be a job, and now it seems young people who get into the industry, it’s all about being an artist, learning different techniques and being creative in how you cut and color.”

“Anything you can imagine, we have someone who specializes in that area,” Jaye said.