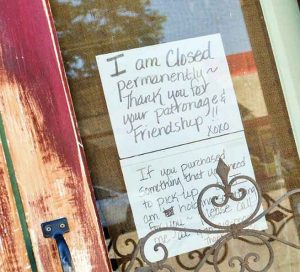 A message posted on the front door of Simply Shabulous last week informs patrons that the store has closed permanently.
May Soricelli / The Surveyor

In May of 2012, Chris Gischel eagerly opened up Simply Shabulous on Mountain Avenue. Although she had the intention of setting up shop there forever, she recently had to make the disheartening decision to close because of unexpected life circumstances.

“I can tell you exactly how I feel: torn,” Gischel said. “I’ve shed a lot of tears over this. When you put this much of yourself into something it’s like losing a part of yourself. But it helps knowing I have something to focus on that’s more important.”

For her, the hobby of maintaining the shop became a part of who she is because of how much of herself she invested; a part of herself that she must now relinquish.

Gischel found that it truly came down to not having enough time to run the shop.

Last fall, Gischel suffered the sudden and tragic loss of her daughter-in-law. She began to help in any way with the young children of her now widowed son. As a grandparent she has had an active role in caring for her grandchildren, which in her mind and heart is the most important thing. While managing her primary full-time job, caring for the children, and running the shop on the side, she found that something had to give.

For Gischel, her life force and happiness in this time of mourning and difficult decisions is her grandchildren.

“We decided that we already had our chance at a childhood, we want to give them theirs. I don’t know any grandparent who wouldn’t do as much,” said Gischel.

The community will see yet another unique local retail shop close its doors, and as a long-time Berthoud resident, Gischel feels the weight of that.

She said that Simply Shabulous was so much more than just a retail store, it was about making a connection with people who have the same appreciation for vintage items that she does.

“My regulars, I will miss them like crazy; they don’t just shop, it becomes a gab-fest. I’ve made wonderful life-long friends,” said Gischel.

She said that her shop was very successful and had regulars coming in as frequently as two or three times per week, always finding something new they loved.

Gischel recalls before she opened the shop how the building originally stood out to her as it sat vacant for nearly four years on Mountain Avenue. She told her husband that she had to have it. After inquiring about the owner and discovering it was not for sale, she sent a letter to the owner. To her surprise, the owner was willing to sell it to her, and thus she started her business.

For two years Gischel collected beautiful pieces from bygone eras and sought to rescue neglected and dusty antiques. She personally refurbished many pieces and brought back to life numerous unique items.

“I was very picky about what I brought into that shop; it had to create a certain atmosphere,” said Gischel.

Of the countless memories made at Simply Shabulous, Gischel is most fond of the discovery of unexplainable activity in the shop. She sought out a psychic to study the occurrences, who later gave her a recording of one particular “voice” in the shop. Gischel stated that while the woman making the recording was walking around her shop, with her audio equipment on, she pointed at a vase that she liked and said, “Oh my gosh, this is cute. How much is this?” According to Gischel, the recording picked up a little girl’s voice responding “It’s under $20.”

“It was fabulous. I would always greet the little girl in the garden and tell her about new things I was bringing in,” Gischel said.

With discounted items for the last several weeks, the entire inventory was purchased by two ladies from “Dragonfly Collectibles” out of Brush.

With the inventory sold, Gischel closed the doors for good on July 2.

After weeks of reducing inventory, the shop is now under contract to be purchased by the end of July.

Despite the loss of Simply Shabulous, Gischel looks eagerly to her future of devoted time with her grandchildren. She is also excited to focus more of her time and attention on decorating her own home.

“You put all this work into a shop for the community and you neglect your own home,” she said.

As far as discovering vintage items, restoring them to life, and sharing them with others, Gischel said, “I don’t know that I can stay away from it, it is something I love to do. I’m sure it is something I will come back to later on.”